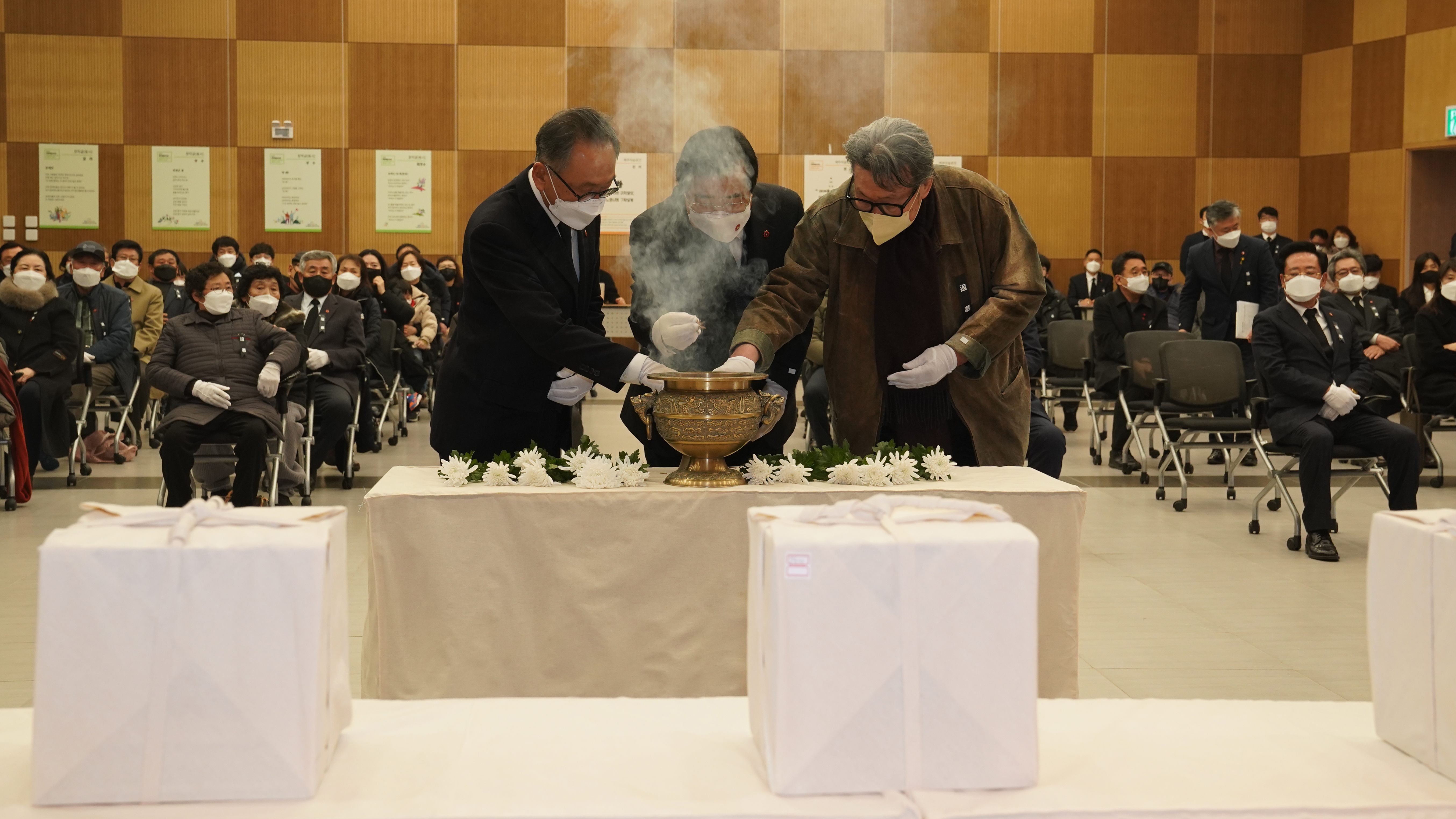 [Koh Hee-bum, current president of the Jeju 4·3 Peace Foundation, and Yang Jo Hoon and Jang Jeong-eon, former presidents of the foundation, offer incense in front of the remains of Jeju 4·3 victims during the Report on Newly Identified Jeju 4·3 Victims.]

After some 74 years, victims of Jeju 4·3 have now been returned to their families.

Hosted by the Jeju Special Self-Governing Province and the Jeju 4·3 Foundation, the Report on Newly Identified Jeju 4·3 Victims was solemnly held at the Jeju 4·3 Peace Education Center on Feb. 10, 2022.

The remains were recovered between 2007 and 2009 from exhumation projects conducted in the northwest and northeast parts of the north-south airstrip of Jeju International Airport with their identities having remained unknown for years.

The Jeju provincial government and the Jeju 4·3 Peace Foundation applied the next generation sequencing (NGS) to previously unidentifiable remains. Additional blood samples from 153 bereaved families were used to identify the remains of the five victims. The remains of Kim Gyu-hee could be identified due to a blood sample taken from his 101-year-old elder sister, Kim Gong-yeol.

Prof. Lee Soong Deok of Seoul National University’s Department of Forensic Medicine who worked on the project said: “It was meaningful to have applied new methods. Also, more families now take part in blood sampling. I hope more will participation, and more unidentified victims will go back to their families through this systematic project.”

A reunion followed the briefing during which the families could not help but shed tears on being reunited with their once lost loved ones after more than 70 years. The bereaved families Praying that the victims let go of pain and rest in eternal peace, the survivors and descendants who attended the ceremony attached labeled the victims’ caskets hoping for their eternal rest.

[A joint ritual is performed after the caskets were enshrined.]

“I give my deepest regard to the officials of the Jeju 4·3 Peace Foundation who led the exhumation project. I was born in 1948, and my father happily returned home from abroad to see me. He was with me for only three days before he had to again part ways from our ways.

Now, after 74 years, we are reunited. When I heard they were taking blood samples of the bereaved families of the Jeju 4·3 victims, I was already in the dawn of my life, and thoughts about my father were seemingly fading away. I did not place much hope in it, but I did take part in the blood sampling. A few weeks ago, I was told that you found my father, and I am very grateful for it. I am happy that I can now fulfill my filial duty since I have been given the chance to enshrine my father. For 74 years, my father had been someone I vaguely remembered. Now, he is with us. All the families here have now met their families who were long lost in memories. I truly hope the reunion today can heal our pain. I also hope we will all treasure this day.” (Kim Yeong-sook, daughter of the late Kim Seok-sam) 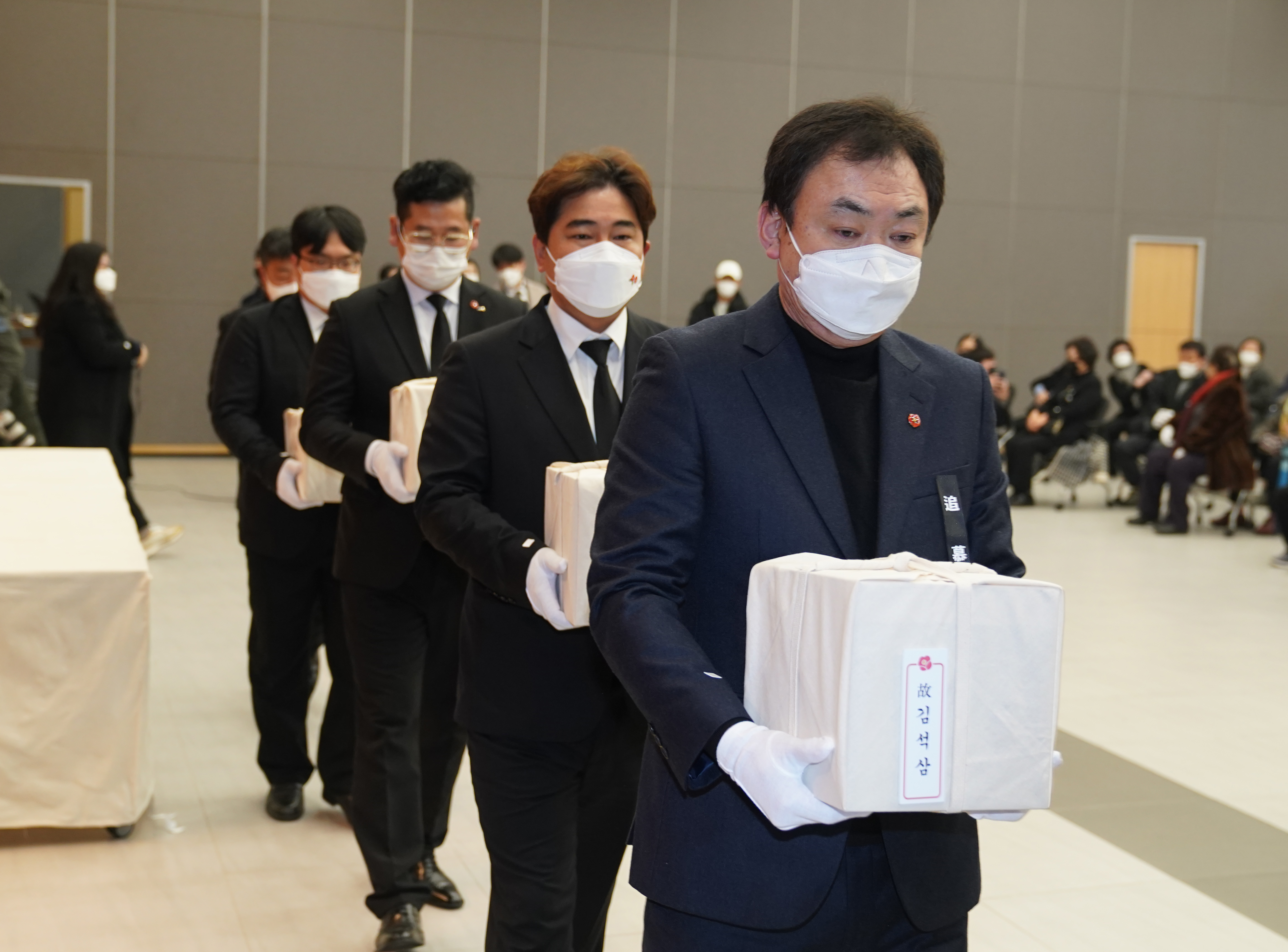 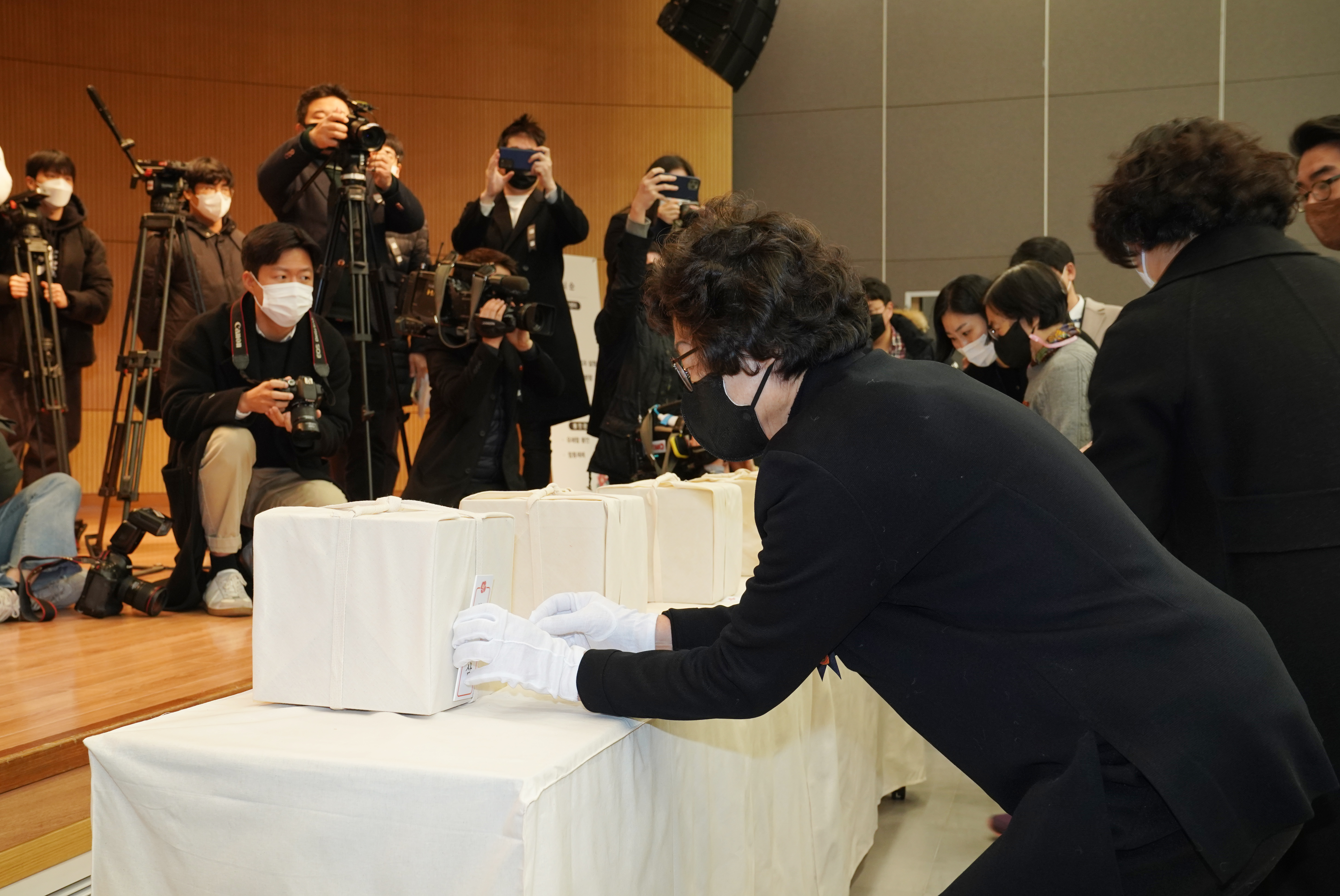 [All participants of the event paid silent tribute to the victims, praying that the deceased rest in peace.]

The families carried the remains to the Enshrinement Hall of the Jeju 4·3 Peace Park and performed a joint ritual ceremony.

President Koh Hee-bum of the Jeju 4·3 Peace Foundation said, “I hope the spirits of the victims will be placed in eternal rest, leaving sorrow and anger behind, as the bereaved families who have longed to be reunited with their loved ones are here to console them. The peace foundation will do our best to find and identify the last of the remains, and the last of the bereaved families.”

So far, the remains of 411 people have been found by the exhumation project. Among them, 138 people have been identified through DNA testing. The provincial government and the Jeju 4·3 Peace Foundation will continue with the exhumation and DNA identification process throughout the year. Blood sampling of the bereaved families intends to identify not only the victims who went missing within the island but also those who went missing on the Korean mainland.

“Jeju 4·3 was my destiny”: A path of devotion for half of life