Jeju can spread the ‘beauty’ of reconciliation

Lee Mungyo, former chairman of the Jeju 4·3 Peace Foundation,
believes the peace process can serve as a global model 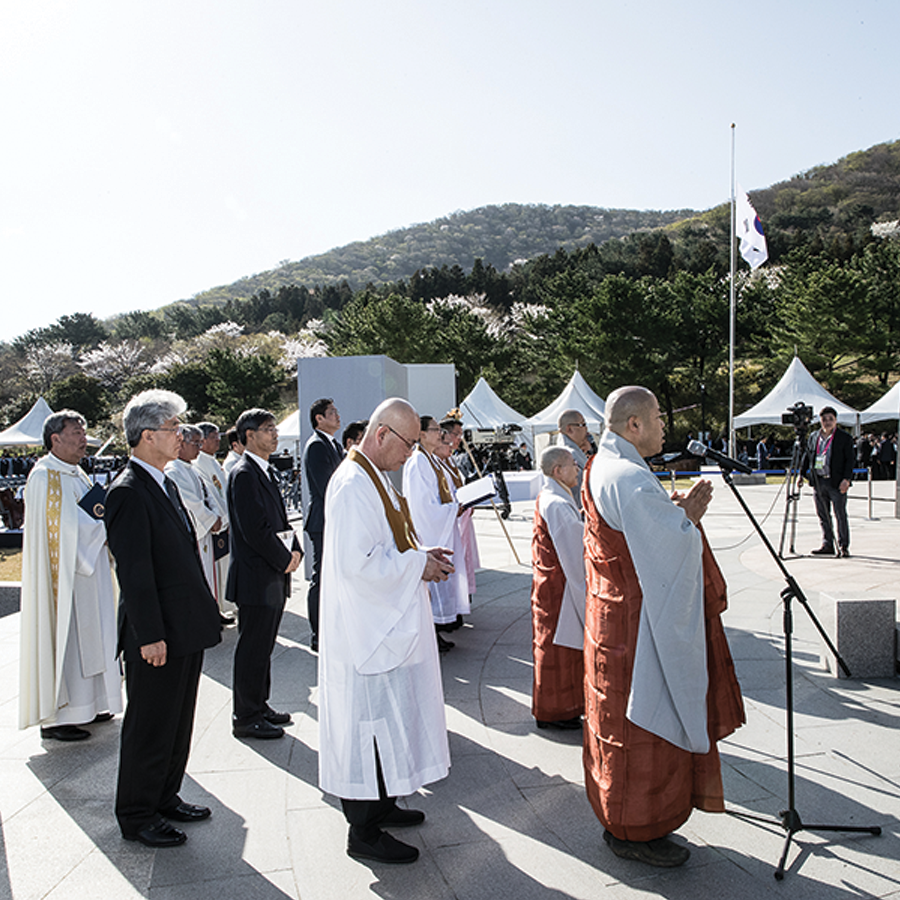 A prayer service is held at a memorial service to the victims of the Jeju 4·3 Uprising and Massacre at the Jeju 4·3 Peace Park. Photo by Yang Dong-kyu

Chairman Lee Mungyo¹of the Jeju 4·3 Peace Foundation believes that if the events have meaning, and the victims are to be truly honored, it is in the noble effort of Jeju Islanders toward reconciliation.

“We still don’t know what 4·3 was in its essence. Before we know that, we cannot talk about ideology and Jeju 4·3,” he said. “However, the reconciliation process has epitomized the spirit of Jeju peace, and this we can show to others.”

The lesson for the world is reconciliation, he said, and the “beauty” of how Islanders overcame the tragic crimes against humanity.

“Therefore, as we move on what we want to do is increase awareness of Jeju 4·3 throughout the world. We are not going to focus on the Incident itself, but how Jeju people reconciled through a spirit of forgiveness.”

The Investigation Report recommended that the government make an official apology to Jeju Islanders and victims, provide compensation and living expenses to victims and victims’ families, and investigate unresolved cases relating to the Massacre.

President Roh, in his apology issued on Oct 31, 2003, said: “The future of Jeju will be as a symbol of human rights and a cornerstone of peace.”

Lee concedes that the reconciliation process has weaknesses, however, including its treatment of victims as a group, rather than allowing individual petitions for compensation.

Perpetrators of the massacre also escaped investigation, and many thousands of victims’ bodies are still undiscovered.

US complicity (the United States Army Military Government in Korea governed below the 38th parallel between September 8, 1945 and August 15, 1948) in the violence is also brushed over, fueling the ongoing campaign for an apology from the White House.

Lee urges us to look beyond these unresolved issues and focus on the pragmatic course taken by Islanders to find a resolution, which speaks to the pacific nature of Jeju culture.

“4·3 reconciliation was able to draw from the spirit of peace embedded in our culture; that spirit did not just arise one morning,” he said.

1 This interview was conducted in April 2016 while Lee Mungyo was still chairman of the Jeju 4·3 Peace Foundation.