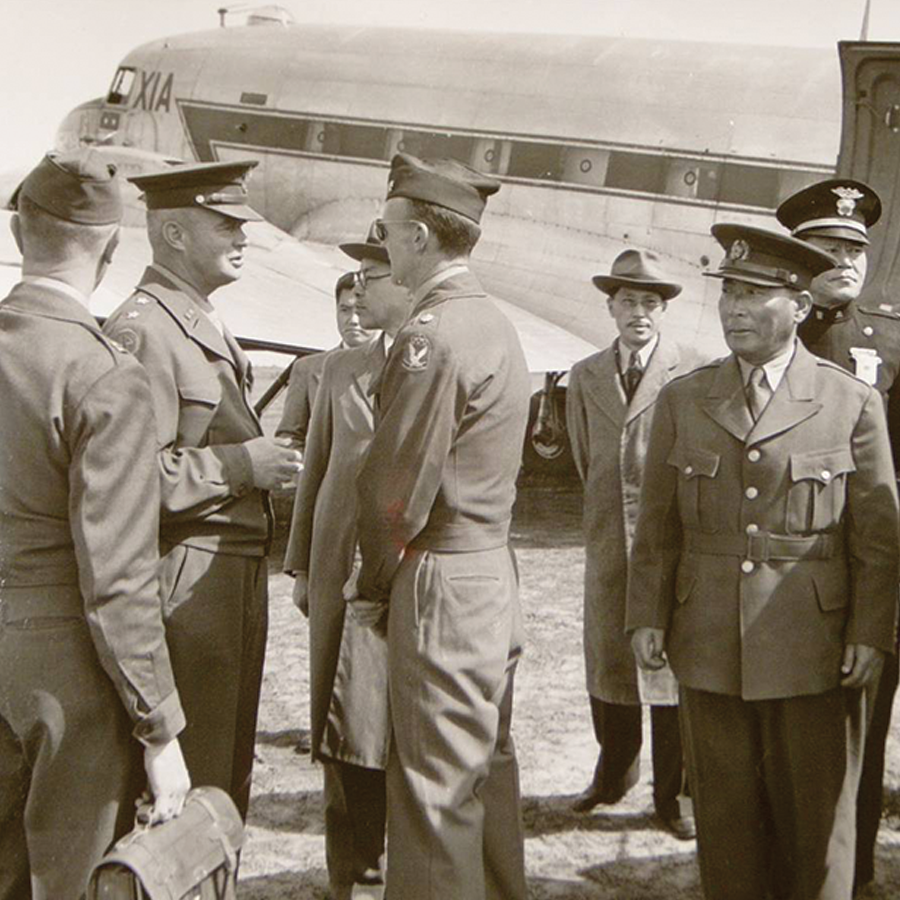 Members of the USAMGIK are greeted at Jeju Airport on May 5, 1948, including the military governor, General William F. Dean (second from the left).

The American response was swift and draconian: another U.S.-armed regiment was imported from Busan, and an additional 1,700 police were sent in. Between late March and mid-May, ten thousand people were detained. The government continually reinforced its garrison, as attacks and counterattacks mounted in intensity. Insurgents retreated to their bases in villages, caves, and the forests on Mount Halla, the extinct volcano whose mammoth presence looms over the island. On April 29, the provincial governor and a majority of the local constabulary in Daejong-myun went over to the side of the guerrillas, leading to a bloody battle.

The United States ordered the commanding officer of the Ninth Regiment of the Korean Constabulary, Kim Ik-ruhl, to conduct a “scorched earth” policy, but instead, Kim hammered out a three-point peace agreement with guerrilla leader Kim Dal-sam. Although U.S. officials ostensibly arrived on April 29 to help implement the agreement, the treaty was scuttled by the massacre of partisans who had surrendered and returned to their homes in Orari. The police perpetrated these killings, but through a fabricated report the United States blamed them on insurgents. U.S. Colonel Mansfield had originally approved the peace treaty, but hope for a negotiated settlement faded when the U.S. military provincial governor, General W. Dean, vetoed it. Since the governor of the island had joined the guerrillas, Dean needed to find new administrative personnel willing to collaborate with the American occupation government. First, the United States sought to purge SKLP¹ sympathizers from the ranks of their assistants. Lt. Moon Sang-gil was summarily executed in Seoul, as were three sergeants on Jeju. After he had arrested four thousand civilians in two weeks, Colonel Rothwell Brown was asked about his feelings. He replied simply that his “mission was to suppress the uprising.” 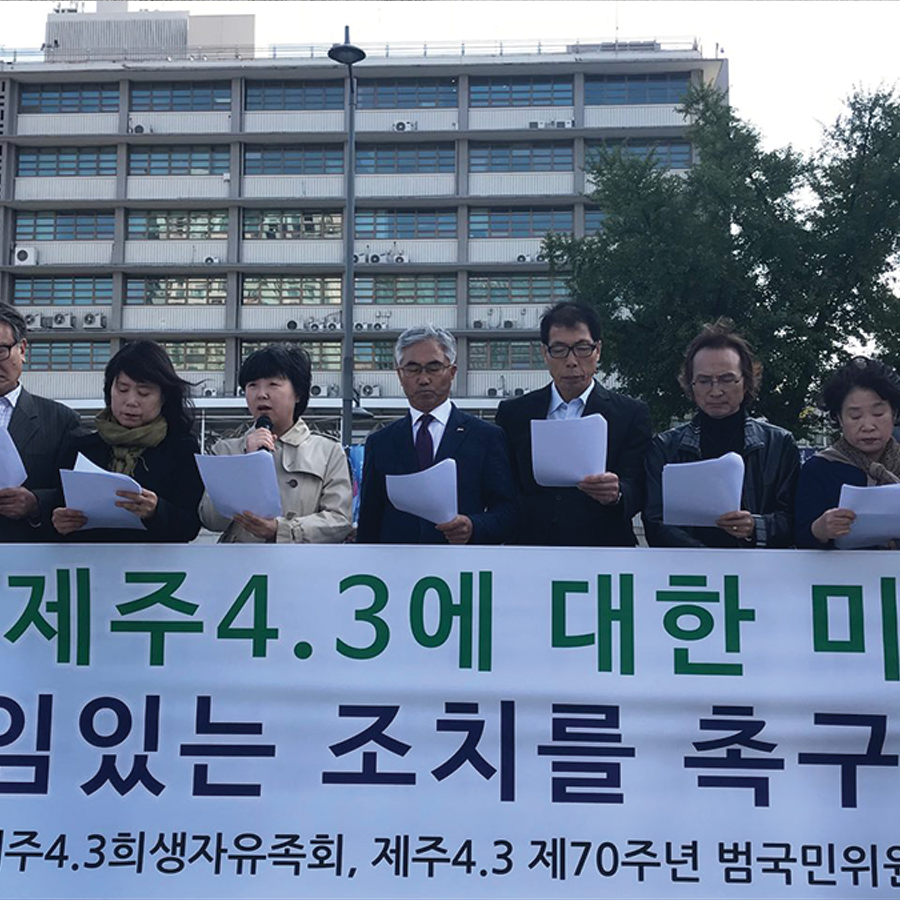 Protestors outside the U.S. Embassy in Seoul call on the U.S. to acknowledge its role in the Jeju 4·3 Uprising and Massacre on its 70th anniversary in 2018.

In 2008, the South Korean Truth and Reconciliation Commission found 1,222 instances of mass killings from 1950 to 1953, with at least 215 of these involving U.S. troops or airplanes massacring unarmed civilians. At Cheongwon in central Korea, up to seven thousand people were slaughtered. In the first weeks of the war, as North Korean troops rapidly moved south, thousands of prisoners held by the Rhee regime were executed. Tens of thousands of registered members of the “National Guidance Alliance” were killed in cold blood during the first weeks of the war. In Daejon, some 1,800 prisoners, many of them captured during the suppression of the Yeosun and Jeju uprisings, were executed in a massacre that lasted three days as truckloads full of captured “enemy” were brought to Yangwul, on the outskirts of the city. According to witnesses, at least two Jeeps with American army officers watched the killings. Only in 2008 did news of the Daejon massacre get covered in the New York Times—more than half a century after it occurred. In 2002, I visited Daejon and was shown a very familiar photo by the surviving son of one of the executed prisoners. I recognized the photo except for one major difference: his photo, wrinkled and aged, had a U.S. officer watching the prisoners about to be executed. In all the versions of the famous photo carried in U.S. media, the American had been cropped out of the frame.

To be sure, American allies in South Korea continue to assert their own autonomous role. In 2008, after the conservative Lee Myung-bak government took office in Seoul, it immediately began to dismantle the country’s Truth and Reconciliation Commission and closed the official investigation of the massacres in Jeju. Under the Lee administration, breakthroughs in accurately reporting history are being reversed. Yet, like Pandora’s box, once the truth of past atrocities became known, it will be impossible to pretend they never happened.

Howto become a Superior Merchant If You Aren't a Natural Merchant

The Korean Massacre the U.S. Needs to Apologize For