Truth Revealed to the World after 73 Years

Truth Revealed to the World after 73 Years

The exhumation performed on March 31, 2021, in Uguri Hill in the southeastern village of Gasi-ri (Pyoseon-myeon) uncovered the remains believed to be of victims of the massacre from a secret burial site created during the scorched earth operation of Jeju 4·3. Their mournful families must have felt an unimaginable pain during the more than seven decades of not knowing where their loved ones were buried. The project to exhume the remains of the Jeju 4·3 victims is critical to relieve the grief of their loved ones and to reveal the truth of the disappearances as well as restore honor to the victims. — Editor

Remains of 259 Jeju 4·3 victims were exhumed in 2008 at the current site of the Jeju International Airport.

The exhumation project started in the 1990s as an investigative effort by the Jeju 4·3 Research Institute. In 1992, researchers discovered the remains of 11 victims in Darangshi Cave in the northeastern village of Gujwa-eup. This served as the catalyst to inform the people across the nation about the atrocity that happened on Jeju decades earlier, and eventually led the enactment of the Special Act on Discovering the Truth of the Jeju 4·3 Incident and the Restoration of Honor of Victims (Jeju 4·3 Special Act). Regrettably, the public security authorities and the administration put pressure on the victims’ bereaved families to cremate the remains and have them scattered at sea against their wishes. Nonetheless, the documentary video and photographs of these scenes recorded by the Jeju 4·3 Research Institute captured the process in order to restore the honor to the victims and clarify the truth of Jeju 4·3.

Starting in 2000, the exhumation of remains was pursued as an ensuing project of the Jeju 4·3 Special Act. In 2003, the national government published the final draft of the Jeju 4·3 Incident Investigation Report and adopted seven recommendations concerning the restoration of honor to the victims of this tragedy.

One of the recommendations specifies that “[t]he government shall support the exhumation and excavation of group burial sites and ruins, provided that the exhumation must be carried out in full respect for the dignity of the victims and their families as well as the unique sense of local cultural values.” Moreover, the bill on the revision of the Jeju 4·3 Special Act was passed at the National Assembly in December 2006 and promulgated on Jan. 24, 2007. In the revised law, a new clause directing further investigations and exhumations with the intent to collect remains at known massacre sites and secret burials locations was added to the list of “Matters that the Committee on Discovering the Truth of Jeju 4·3 Incident and Restoration of Honor of Victims (Jeju 4·3 Committee) shall deliberate on and In 2006, the Jeju provincial government signed an agreement with Jeju National University and the Jeju 4·3 Research Institute to conduct a two-year exhumation project involving five sites, including in the northeastern village of Hwabuk-dong and the current Jeju International Airport site. Under that agreement, the remains of 387 victims were dug up from the airport site in two exhumation projects. Studies revealed that those civilians who had been sentenced to death during the October 1949 court-martial and those who had been detained after the 1950 unlawful preventative arrests were executed by firing squads and buried secretly at the site. Subsequent exhumation projects have been led by the Jeju 4·3 Peace Museum, and the third exhumation at the Jeju International Airport site in 2018 resulted in the recovery of five victims’ remains. Currently, the remains of 408 victims have been excavated from the site, 133 of which were identified through DNA testing by Seoul National University’s Department of Forensic Medicine.

The Jeju 4·3 Peace Foundation held the Reporting Session on the Exhumed Remains Identified as Jeju 4·3 Victims in November 2018 and January 2020. The victims’ families, whose loved ones had finally been identified, wailed in sorrow, hugging the victims’ caskets. The remains identified are now enshrined in the Ashes Enshrinement Hall of the Jeju 4·3 Peace Foundation and will be returned to their families upon request. Lee Soong Deok, a professor at Seoul National University’s Department of Forensic Medicine, participated in the victims’ identification through DNA testing.

The forensic scientist said: “We employed a range of genetic testing techniques to collect data. Above all, a vast number of families who provided blood samples contributed greatly to revealing the identity of the victims.”

Concerning those who have yet to be identified, the specialist called for continued research, stressing that “the participation of the families is important.”

Yang Jo Hoon, president of the Jeju 4·3 Peace Foundation, pointed out that only 2% of those soldiers killed in action during the Korean War have been identified.

“Comparatively, the rate of those identified as a victim of Jeju 4·3 reaches 33%, which is a recordable achievement in Korea,” he said. The 4·3 expert expressed his full commitment to identifying the victims, stressing the need to continue the exhumation efforts. “The families still suffer from the pain, particularly because many of the victims of the preventative arrests and detainment in Jeju’s northern region remain missing.” 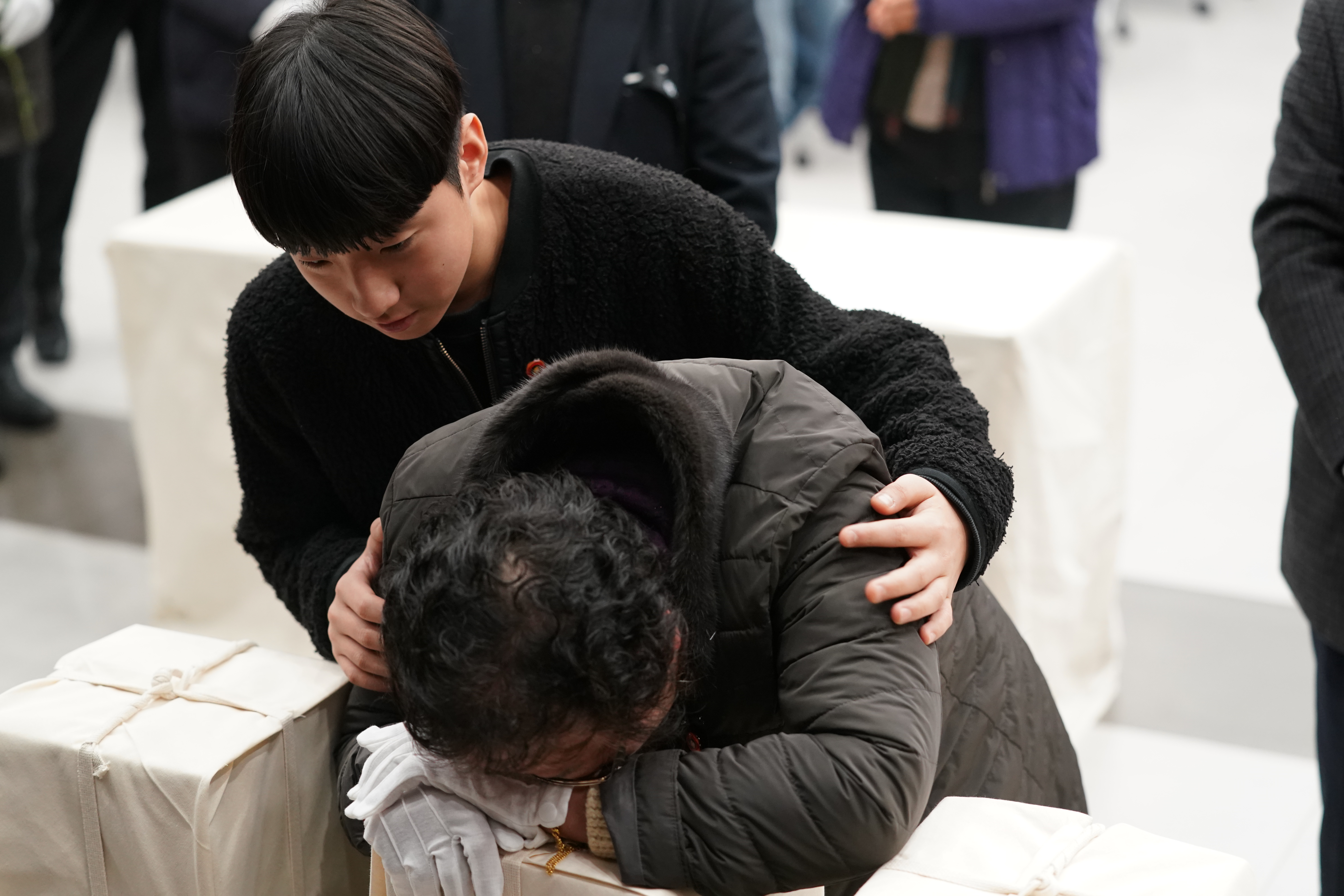 Yang Choon-ja sobs while hugging the casket containing her father’s remains at the Reporting Session on the Exhumed Remains Identified as Jeju 4·3 Victims in January 2020.

The exhumation performed on March 31, 2021, from the secret burial created during the scorched earth operation of Jeju 4·3 in Uguri Hill, Gasi-ri, Pyoseon-myeon, uncovers the remains believed to be of victims of the massacre. (Image: Jeju Ilbo)

On March 31, 2021, the Jeju Special Self-Governing Province and the Jeju 4·3 Peace Foundation held the Reporting Session on the Exhumed Remains Identified as Jeju 4·3 Victims in Uguri Hill, Gasi-ri, Pyoseon-myeon.

The site was a corner of a Jeju mandarin orchard that was between greenhouses. It was the first exhumation site of seven that the Jeju 4·3 Peace Foundation and the Jeju 4·3 Research Institute indicated as secret burial sites in Gasi-ri. All three sets of remains uncovered from the site were not intact, with only parts of the body such as skulls found.

Prior to the Reporting Session, the Association of the Bereaved Families of Jeju 4·3 Victims held a memorial ritual to comfort the souls of the deceased. During the ritual, rest for those who suffered an unjust death was prayed for by key local figures, including Won Heeryong, governor of the Jeju Special Self-Governing Province, Jwa Nam-soo, chairman of the Jeju Special Self-Governing Provincial Council, Oh Im-jong, chairman of the Association of the Bereaved Families of Jeju 4·3 Victims, and Yang Jo Hoon, president of the Jeju 4·3 Peace Foundation. The ritual was followed by the reporting session where Park Geun-tae, director of the Ilyoung Cultural Heritage Research Institute, briefed the participants on the excavation status. Lee Soong Deok, professor at Seoul National University’s Department of Forensic Medicine, also informed the audience on the victims’ identification process through DNA testing.

Another speaker, Kang Kun-seob, a 79-year-old villager of Gasi-ri in Pyoseon-myeon, testified about how he provided information about the burial site. Kang explained he had been told since little that four victims were buried around where the bodies were found. He said, “the exhumed victims are believed to be a seven-member family from Gasi-ri who were killed together.”

“The remains supposedly belong to 48-year-old male Kang Won-gil, 32-year-old female Kim Gye-hwa, and Kim’s 11-year-old son Kang Hong-gu,” he said. “To my knowledge, the family was killed while taking refuge in a cave dwelling and a makeshift hut in Uguri Hill by the counterinsurgency forces on Dec. 21, 1948, at the height of the scorched earth operation.”

Director Park of the Ilyoung Cultural Heritage Research Institute, who is in charge of excavation research, said the location of the remains was “200 to 300 meters apart from the cave dwelling and the makeshift hut where the killings took place as Kang testified.”

While calling for further investigation, he said, “more information has to be figured out on how the remains were relocated, whether or not only skulls and partial remains were reburied, and where the remains of the other family members are located.”

Given that Kang testified that four of the seven victims had been buried on the site, the exhumation and investigation team plans to continue to search for the other victims’ remains.

During Jeju 4·3, a total of 421 Gasi-ri villagers were massacred. The state-led counterinsurgency forces staged the scorched earth operation for four months, which spanned from mid-November 1948 to March 1949, burning the villages in the mid-mountain area and massacring their residents. Of the 82 mid-mountain villages that existed at the time of Jeju 4·3, 35 had 100 or more residents killed. Gasi-ri is the village with the third highest number of victims, following Nohyeong-ri with 538 victims and Bukchon-ri with 446 victims. The Beodulmot Massacre and the Pyoseon Sandy Beach Massacre in Pyoseon-ri are the representative mass murder cases of Gasi-ri residents. The Jeju 4·3 Peace Foundation and the Jeju 4·3 Research Institute took on the exhumation project in Gasi-ri based on the testimonial provided by Kang. On March 22, the burial opening ritual was held with the attendance of officials of Jeju province, the Association of the Bereaved Families of Jeju 4·3 Victims, the Jeju 4·3 Peace Foundation, and the Jeju 4·3 Research Institute.