From One Generation to Another – ‘The Star-at-Dawn Supporters of Jeju 4·3’ at Shinseong Girls’ Middle School.

Article and photos by Kim, Gyu-ri, a teacher at Shinseong Girls’ Middle School 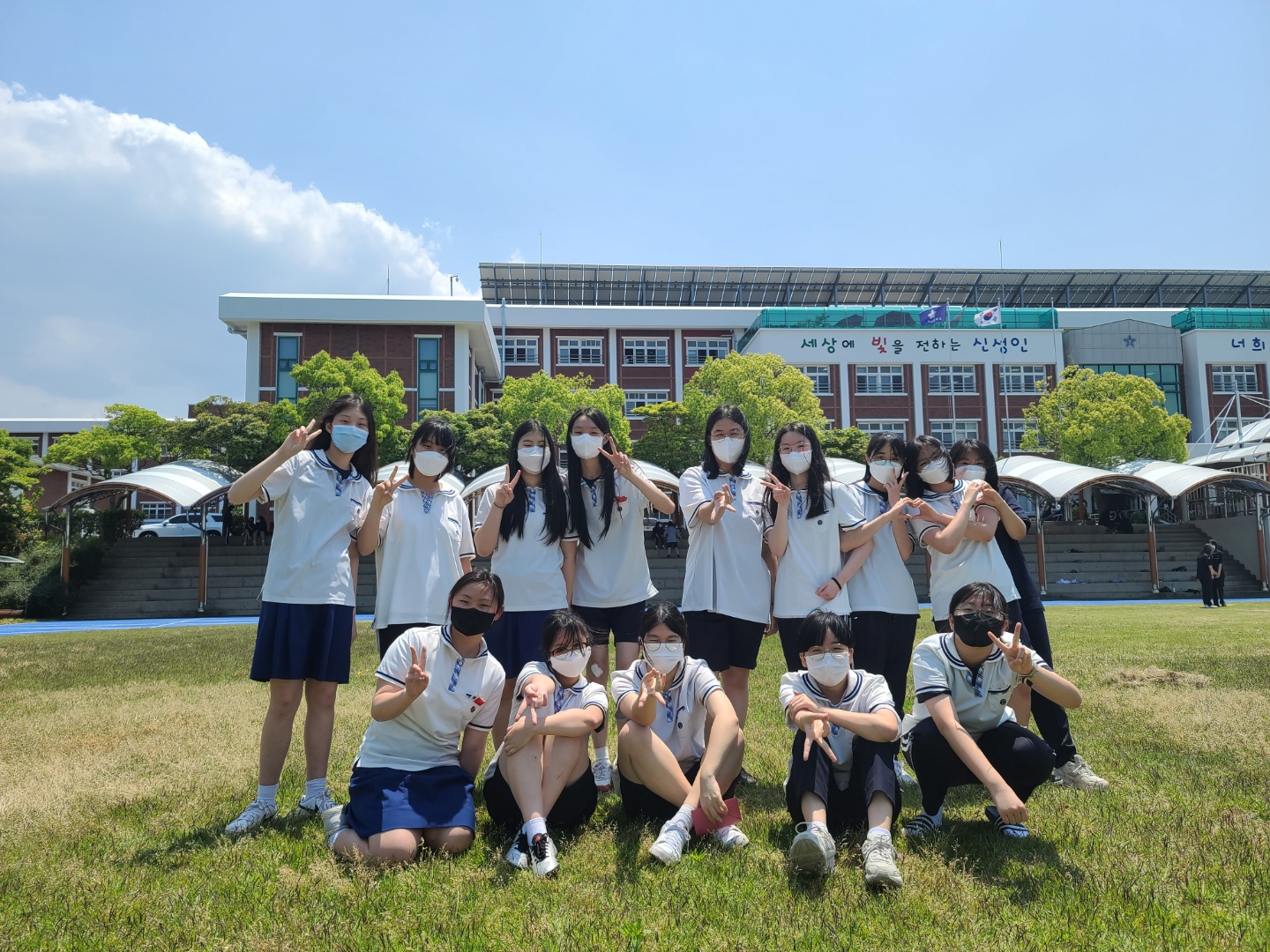 On Saturdays, the students of the ‘Star-at-Dawn Supporters of Jeju 4·3’ gather at Shinseong Girls’ Middle School (‘Shinseong’ means ‘the star at dawn’ in Korean) in a lively mood. The girls are curious about what they will learn and discuss this week.

This is a story about the Shinseong Girls’ Middle School students who began learning about Jeju 4·3 in 2017 as they grew through understanding the memories of the previous generations. <by editor> 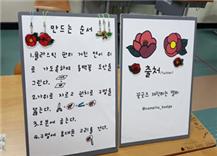 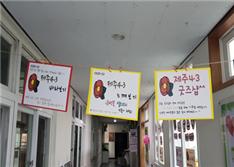 The first stage of growth: the beginning of a study club on Jeju 4·3

In 2017, under the faculty’s guidance, some 3rd graders organized a club called Study Of Social Issues-Group (SOSI-G) to investigate social issues. They began investigating the facts of Jeju 4·3 one at a time.

The various facts and lessons learned were disseminated through student booths during the school festival. They also made goods to sell. Profits were donated as they took the first step in remembering Jeju 4·3.

The second stage of growth: a policy proposal about youth education on Jeju 4·3

For about two years, I thought more students were interested in Jeju 4·3. This was only partially true as I observed some students chatting during a commemoration ceremony for Jeju 4·3. The SOSI-G decided to take a look at this issue socially and propose a needed education policy to identify the problems of the current Jeju 4·3 education for youth.

Social participation includes the stages of posing problems: analyzing existing policy, suggesting public policy, and executing it. The members of SOSI-G undertook the following process to help activate Jeju 4·3 education so that more students could remember Jeju 4·3 together.

In the problem-posing stage, the members conducted studies and interviews with experts on Jeju 4·3. Also, they did surveys about how students perceived Jeju 4·3.

These activities earned the SOSI-G a grand prize (Minister of Education Prize) in the ‘10th Youth Social Participation Announcement Rally, 2019’ hosted by the Korea Democracy Foundation and Yonsei University. 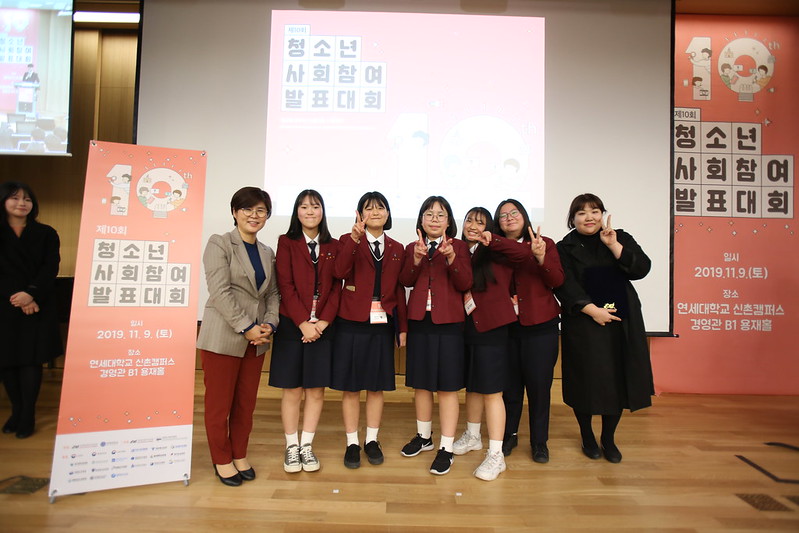 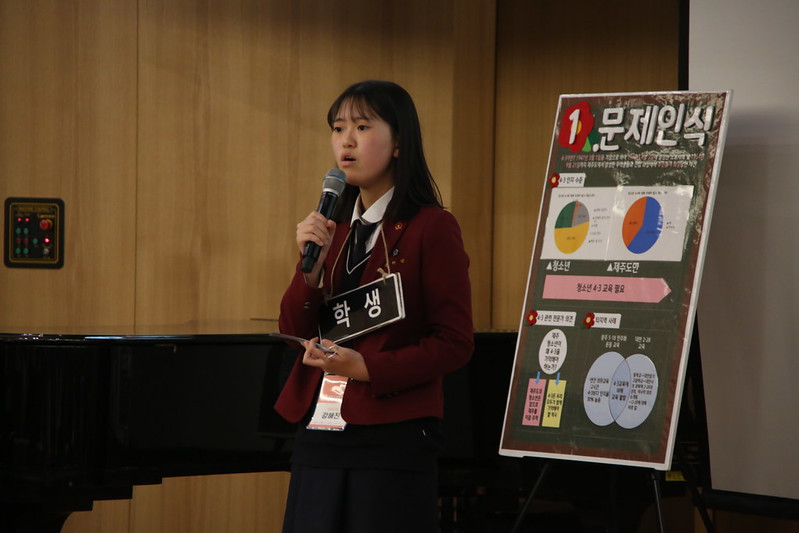 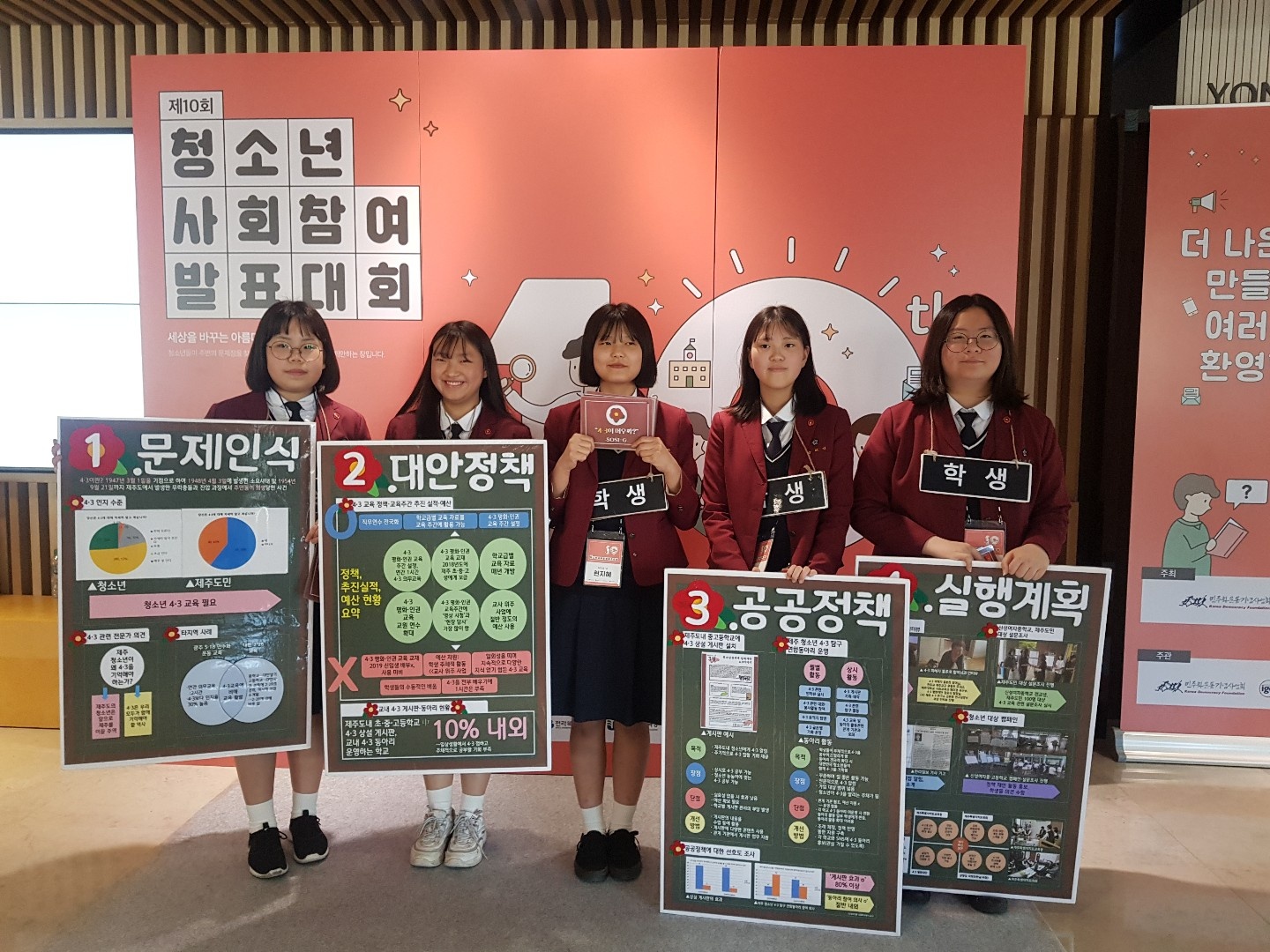 Starting next year, the Provincial Office of Education is scheduled to expand support for clubs involved in Jeju 4·3 and human rights. It was meaningful that our members won a grand prize and that our voices were heard and reflected in the policy. What’s more meaningful is the experience students have had so far. In particular, the students cherished their experience interviewing Ms. Hong, Chun-ho from Donggwang-ri as they learned about Jeju 4·3.

In the summer of 2022, we paid a visit to Ms. Hong, a victim of Jeju 4·3, to listen to her life story. In the interview, she said, “I still remember the name of my sibling killed in a cave. I may forget what happened yesterday, but I can never forget about Jeju 4·3.” Now, it is our time to share her memories. We, who will lead the future of Jeju, want to share and pass it down (From a student report) 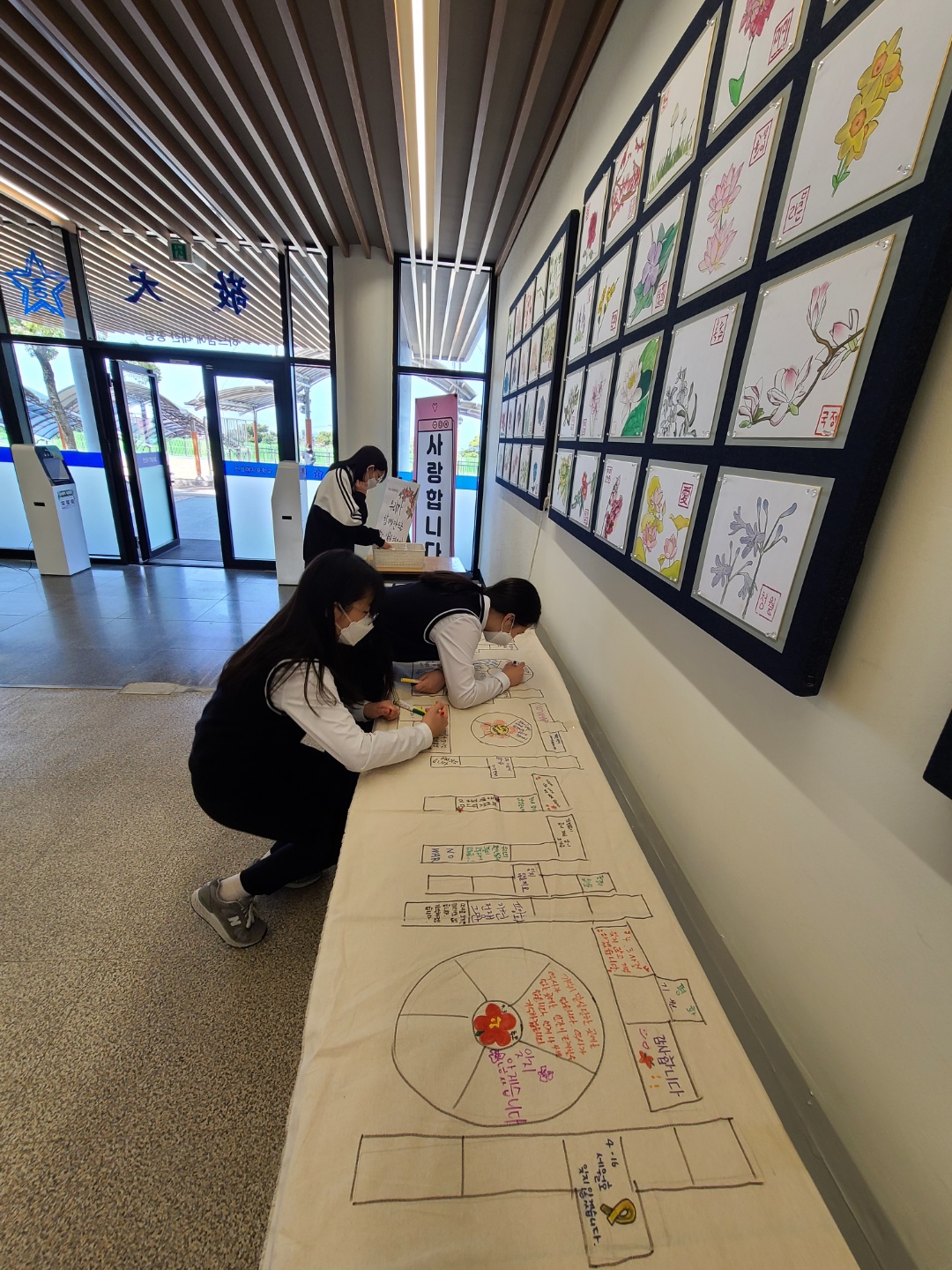 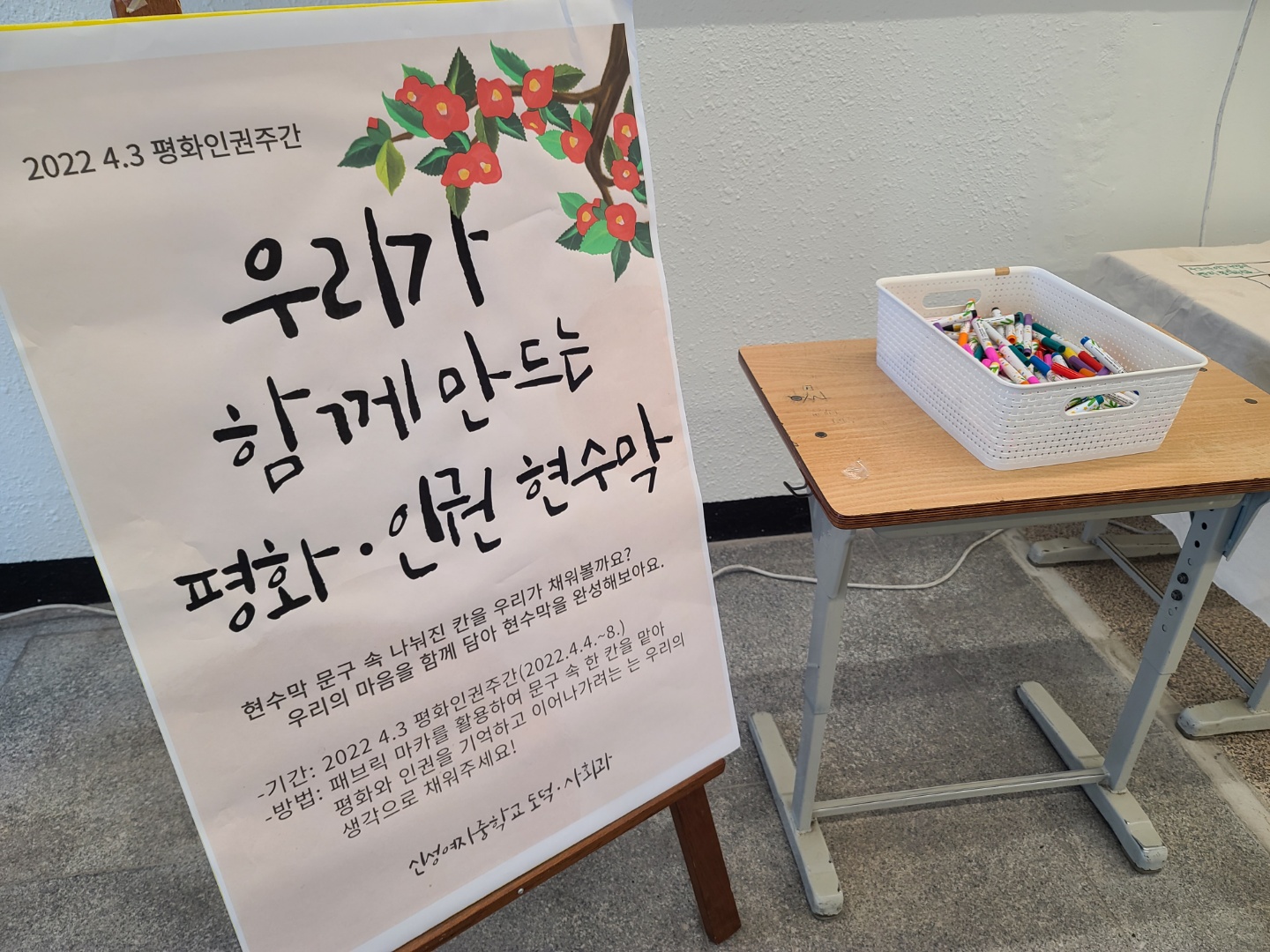 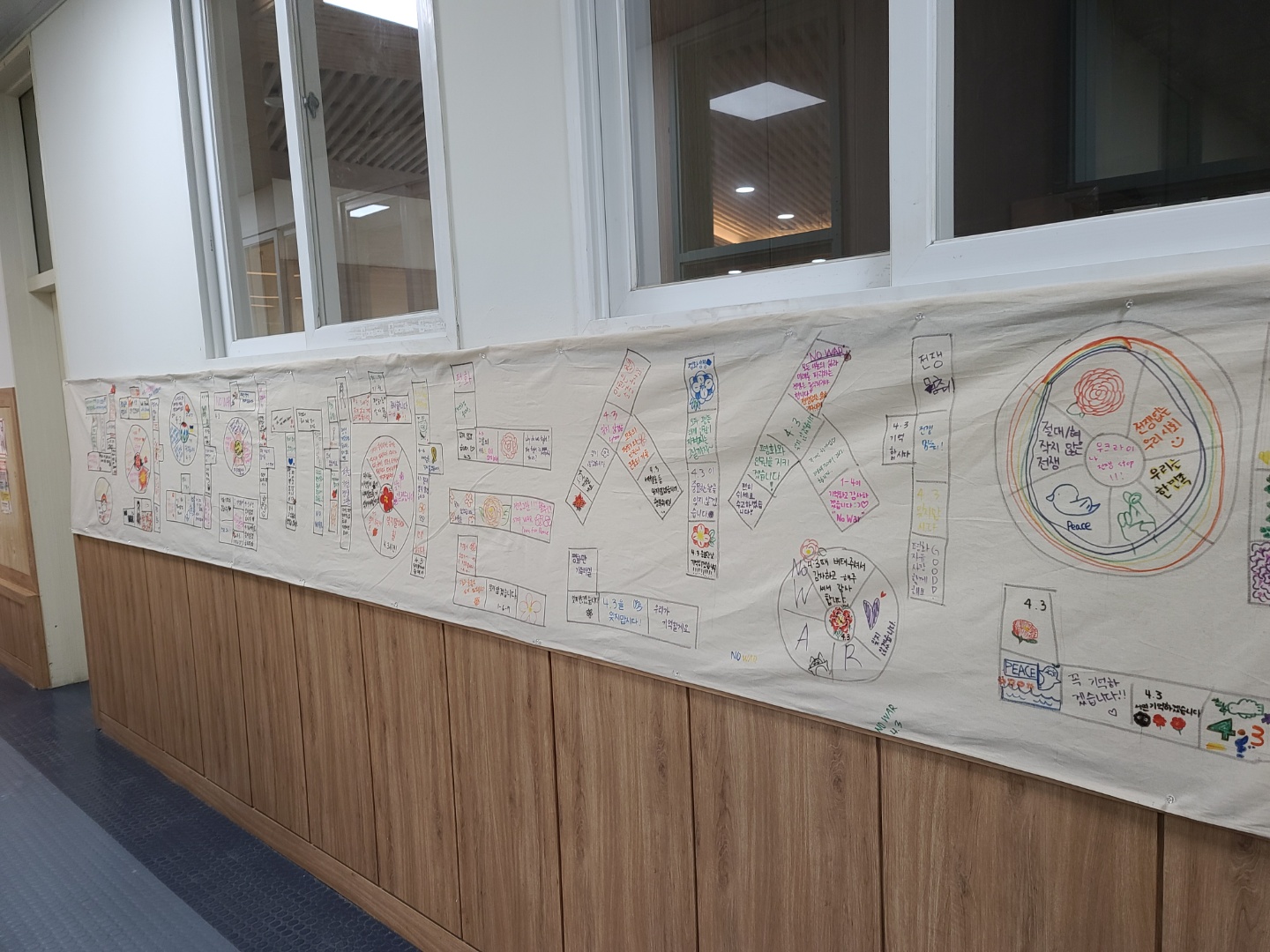 [During the week of Jeju 4·3, Peace and Human Rights, students are making a placard.]

The third stage of growth: The ‘Star-at-Dawn Supporters of Jeju 4·3’ club activities

* A group-based investigation on Jeju 4·3

After the participation in the 10th Youth Social Participation Announcement Rally, the club was divided into ‘SOSI-G,’ for social issues other than Jeju 4·3, and the ‘Star-at-Dawn Supporters of Jeju 4·3,’ a group dedicated to studying Jeju 4·3. Also, an after-school class has been opened for students other than the club members to join and study Jeju 4·3.

Every year, during the week of Jeju 4·3, Peace and Human Rights, teachers and students prepare for the event together. The activities include ‘building a Jeju 4·3 tree and peace,’ ‘learning about Jeju 4·3,’ and ‘making a placard for peace and human rights.’ Members advertise to those not in the club to recognize and remember Jeju 4·3.

Based on what they learned, the ‘Star-at-Dawn Supporters of Jeju 4·3’ are performing a standing exhibition posted on school bulletin boards. Also, they are holding a ‘Jeju 4·3 image contest and goods manufacturing project’ to inform more students at school about Jeju 4·3. On April 3rd of every year, they pass out handcrafted file folders and buttons to all the school’s students to share and to remember Jeju 4·3.

In spring and fall every year, students take tours to historic sites related to Jeju 4·3 with the help of the Jeju 4·3 Research Institute. In the beginning, it was challenging to schedule and attract attention from students. Now, however, many students are willing to join the tour. The stories they listen to onsite reinforce what they learned from books and in the classroom. It serves as a foundation for their growth. 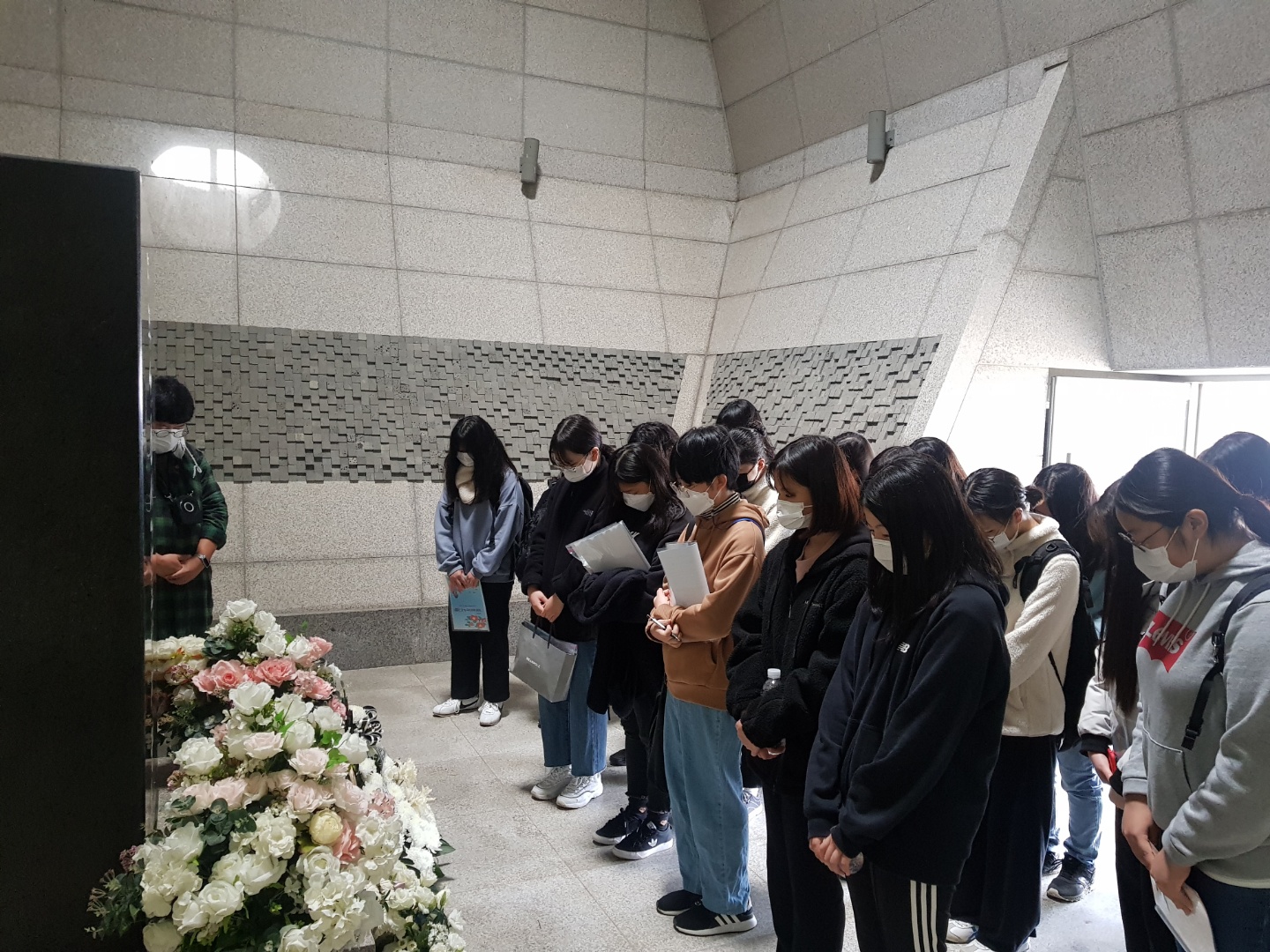 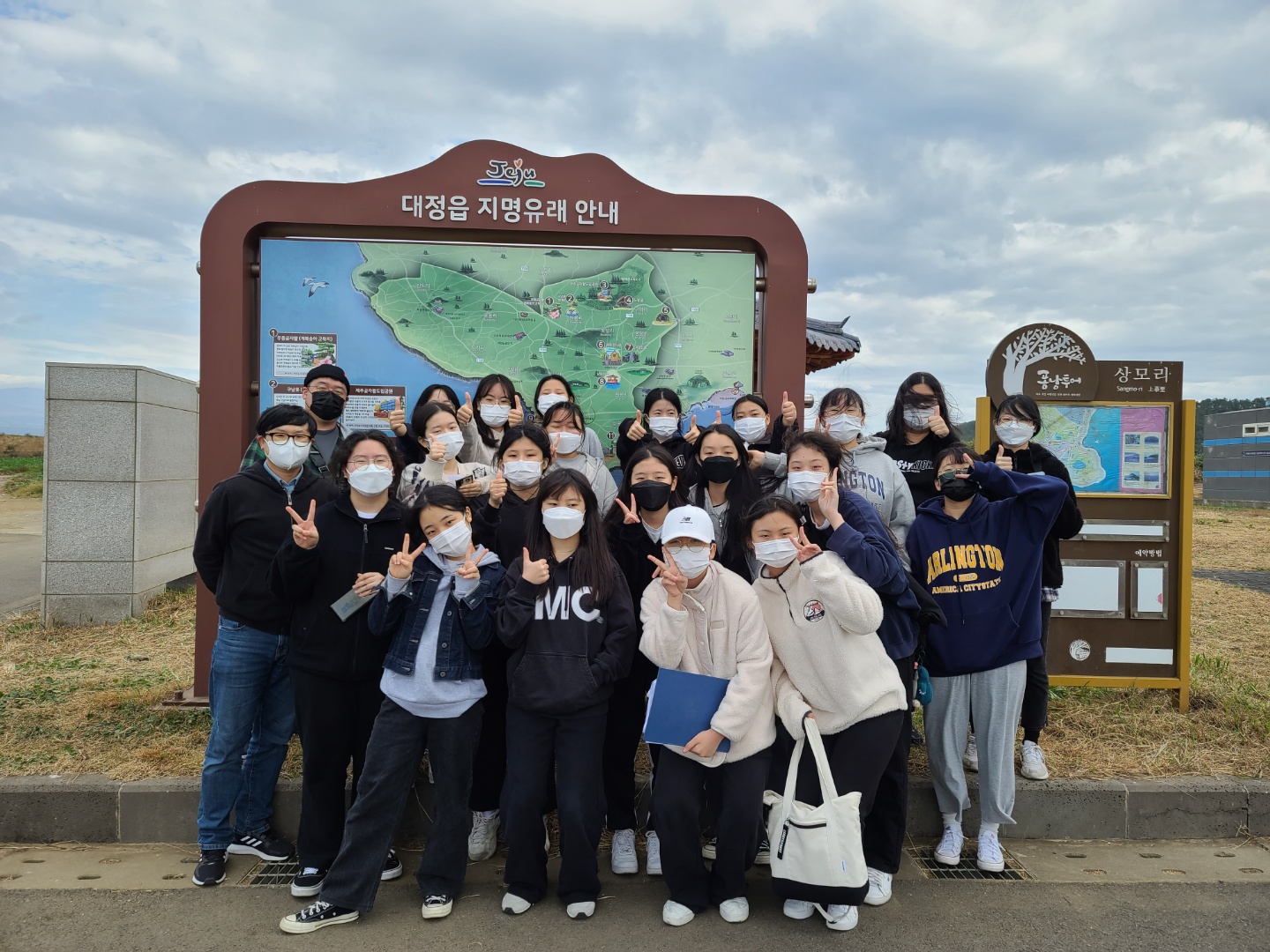 The fourth stage of growth: learning about peace and human rights beyond Jeju 4·3

Students are now learning about various peace and human rights cases beyond Jeju 4·3. The activities include commemorating the Sewol ferry disaster, learning about the May 18 Democratization Movement, making a ‘line’ of human rights, and making a statue of peace.

Especially in 2021, the students learned about and participated in the ‘#Stand_with_Myanmar challenge’ on Instagram. It was meaningful in that the club members and all students could participate in the challenge. 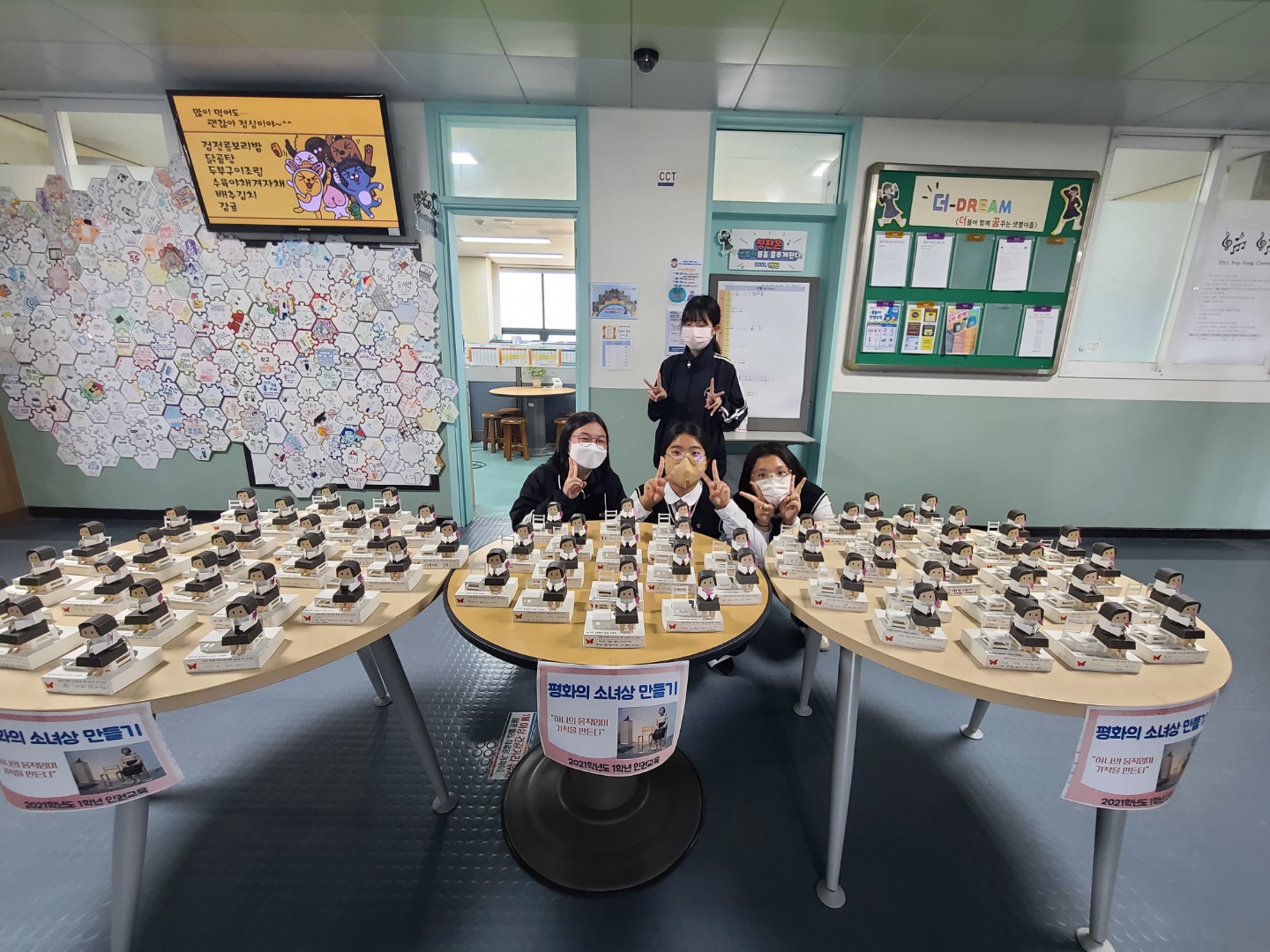 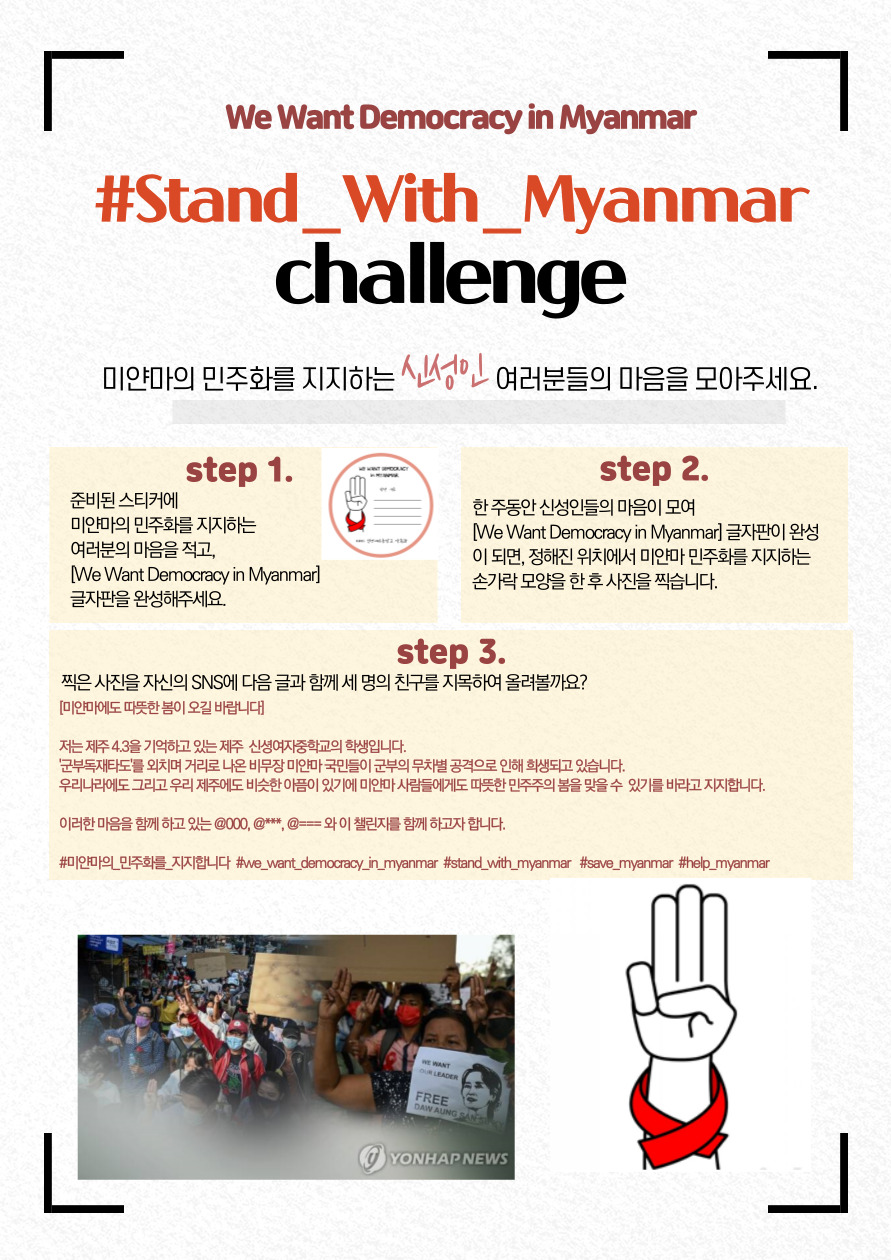 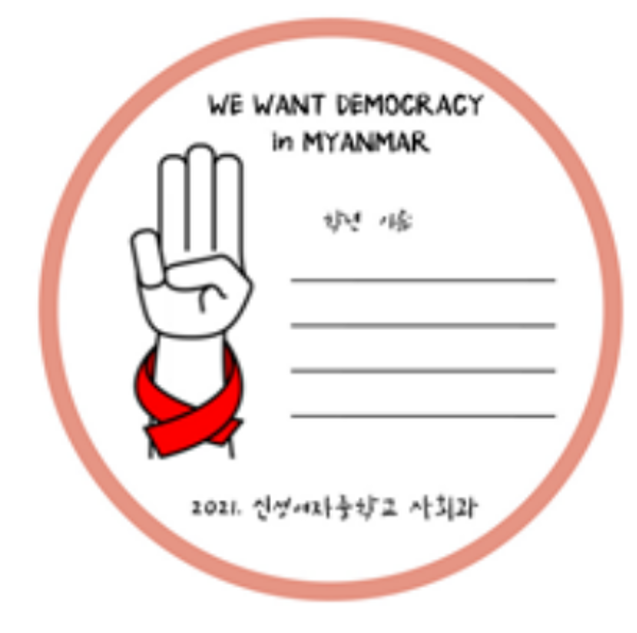 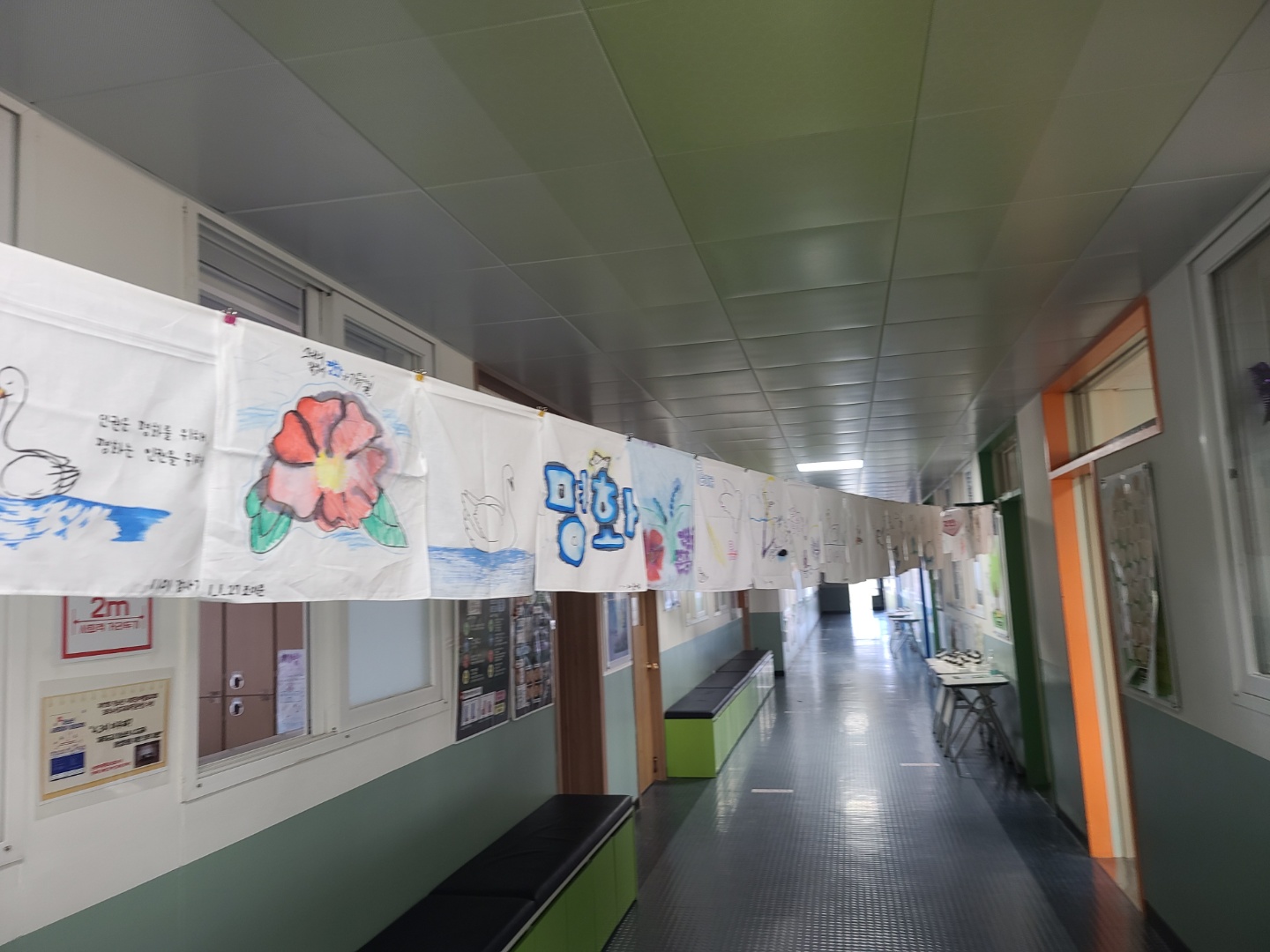 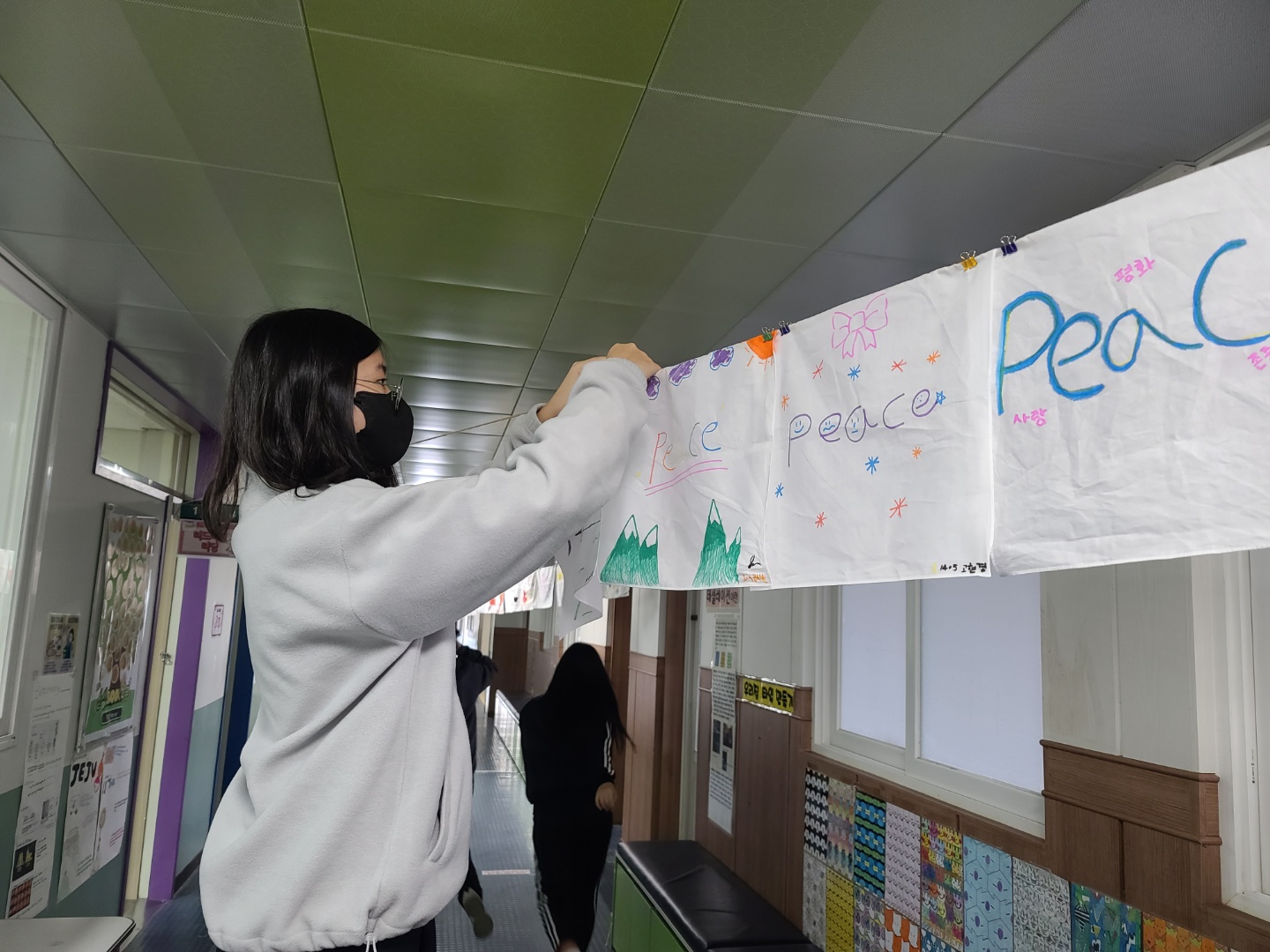 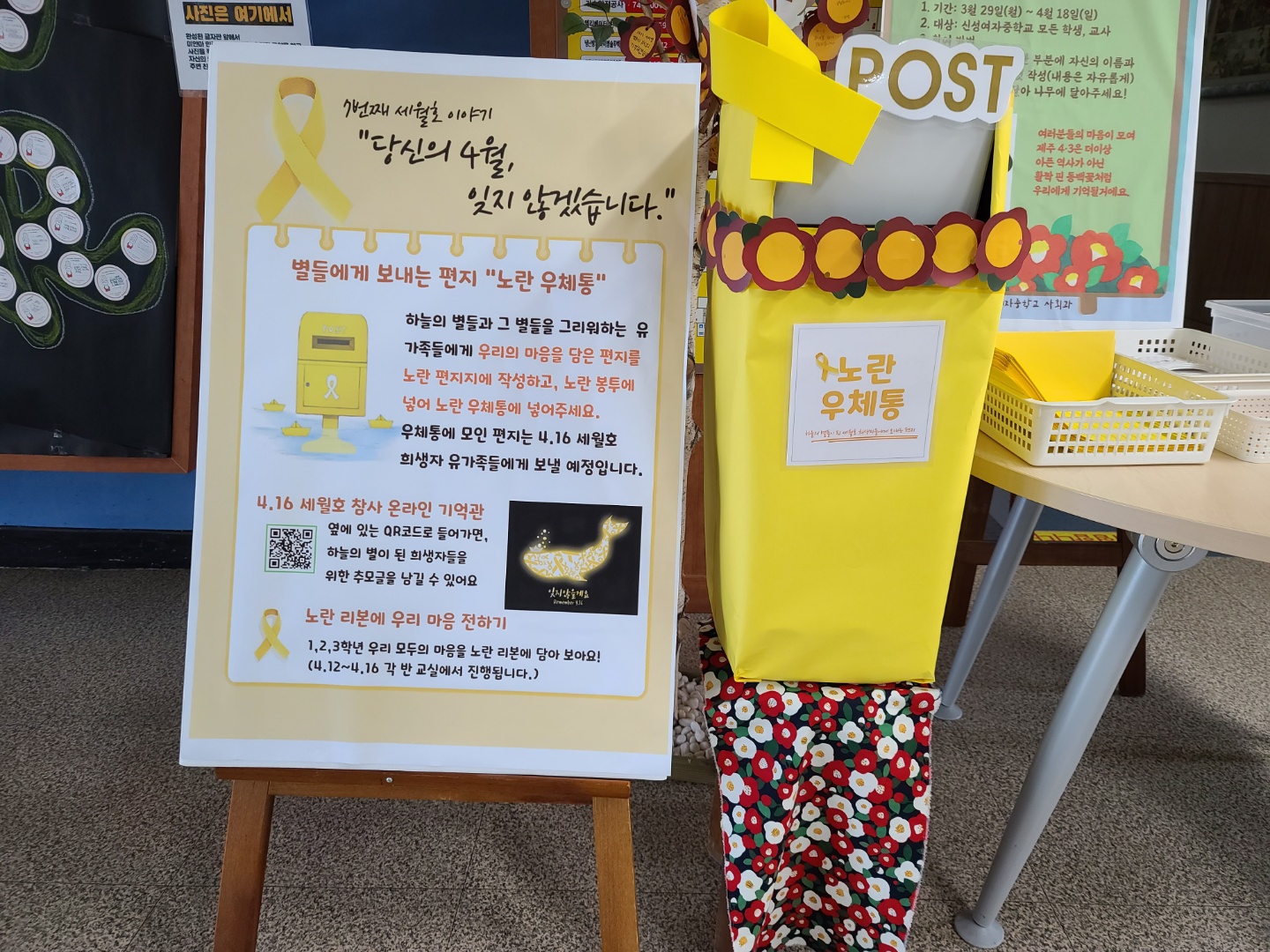 [‘The line of human rights,’ ‘statue of peace,’ and ‘#Stand_with_Myanmar challenge’ activities.]

Our Star-at-Dawn Supporters are still growing.

I could see many students took the liberty of putting the Jeju 4·3 emblem on their backpacks. It made me smile. The Star-at-Dawn Supporters of Shinseong Girls’ Middle School are also preparing for various activities regarding peace in Ukraine. I am very proud of the students as I think of what they will learn through the experience.

The activities are simple. We are taking one step at a time, learning about Jeju 4·3 as residents of the island. The students learn, little by little, the meaning of true peace and human rights and what kind of adults they should be growing into as they remember Jeju 4·3. What they learn in middle school will accumulate and become the very part that will change many aspects of Jeju.

“It was a hectic schedule preparing for the contest, including while the two typhoons hit Jeju. However, it is still unbelievable that the elderly went through Jeju 4·3, which is much more severe than a typhoon. This has made me decide to be more seriously involved in developing Jeju 4·3 education and remembering the incident.” (From a student report on the 10th Youth Social Participation Announcement Rally)

A Young Poet’s Conscience That Awakened 4·3

Overcoming the Era of Stigmatization and Discrimination