The bill to partially amend the “Special Act on Discovering the Truth of the Jeju 4·3 and Restoring Honor to the Victims” went into effect April 12.

With the enforcement of the revised law, 90 million won will be designated to compensate the families of victims who died or went missing due to Jeju 4·3. The Ministry of Public Administration and Security also decided to apply 60% of the said compensation (i.e. 54 million won) to those victims who have suffered residual disability caused during Jeju 4·3 with regard to the loss of their ability to work, on the grounds of the nation’s disability grading scheme and the fact that the victims lost the ability to work.

Meanwhile, 20 million won will be given as compensation to those who have been recognized as Jeju 4·3 victims of residual disability and whose degree of disability is difficult to determine.

For the victims who experienced unlawful imprisonment concerning Jeju 4·3, the ministry proposed to pay up to 20 million won as consolation money for emotional distress with the amount determined by the Jeju 4·3 Committee, which multiplied the number of days of imprisonment and detention at a daily maximum rate of criminal compensation (i.e. 364,000 won) as of the year the decision for the payment was made.

Gov’t to accept applications for compensation from June

The compensation application period for Jeju 4·3 victims is three years from June 1 to May 31, 2025.

The applications will be accepted by the Jeju provincial government, Jeju City and Seogwipo City governments, and 43 eup-, myeon-, and dong-level Community Service Centers. Eligible applicants must fill in and submit the application form (i.e. a written report) along with a copy of their Family Census Register either to the Jeju 4·3 Compensation Support Team of Jeju province or to competent agencies. Bereaved family members residing outside the province and overseas can only apply to the Jeju 4·3 Compensation Support Team. The required Family Census Register is a detailed Family Census Register that is issued by the General Civil Service Office of the islands’ city halls and relevant eup-, myeon-, or dong-level Community Service Centers.

The Family Census Register needs to be issued on the basis of Jeju 4·3 victims, not of their inheritors.

Once a written report is submitted, a preliminary fact-checking investigation will be undertaken to determine if the applicant is eligible for compensation. Then, after collecting the submitted reports by region groups of Jeju City and Seogwipo City, the application will be reviewed to ensure the applicant is deemed to be a rightful claimant under the Civil Act. Under this procedure, a family tree will be drawn for each Jeju 4·3 victim requesting compensation. It can be understood as a “genealogy” of each victim that the administrative office creates. The family tree is required both to check whether the applicant is the rightful inheritor based on the Family Census Register and to clarify the share of inheritance to be divided among the surviving family members. When the written report and the Family Census Register collated by administrative city offices are submitted to the Jeju Provincial Government, the Jeju 4·3 Compensation Support Team will check them again.

Under these procedures, the eligible claimants will be notified if they can receive compensation. Subsequently, the compensation will be paid within 30 days into the account of the claimant or claimants: the surviving victims or the bereaved family members of the victim. In accordance with the share of inheritance to be divided, the compensation will be transferred into the designated individual accounts of which the copies of bank books are preliminarily submitted. The number of Jeju 4·3 victims who have been recognized by the government since November 2011 is 14,539, including 10,425 people who were killed, 3,632 people who went missing, 196 people who have suffered from residual disability, and 286 people considered Jeju 4·3 convicts as they served jail terms under unlawful convictions. And the number of bereaved family members is 81,106. 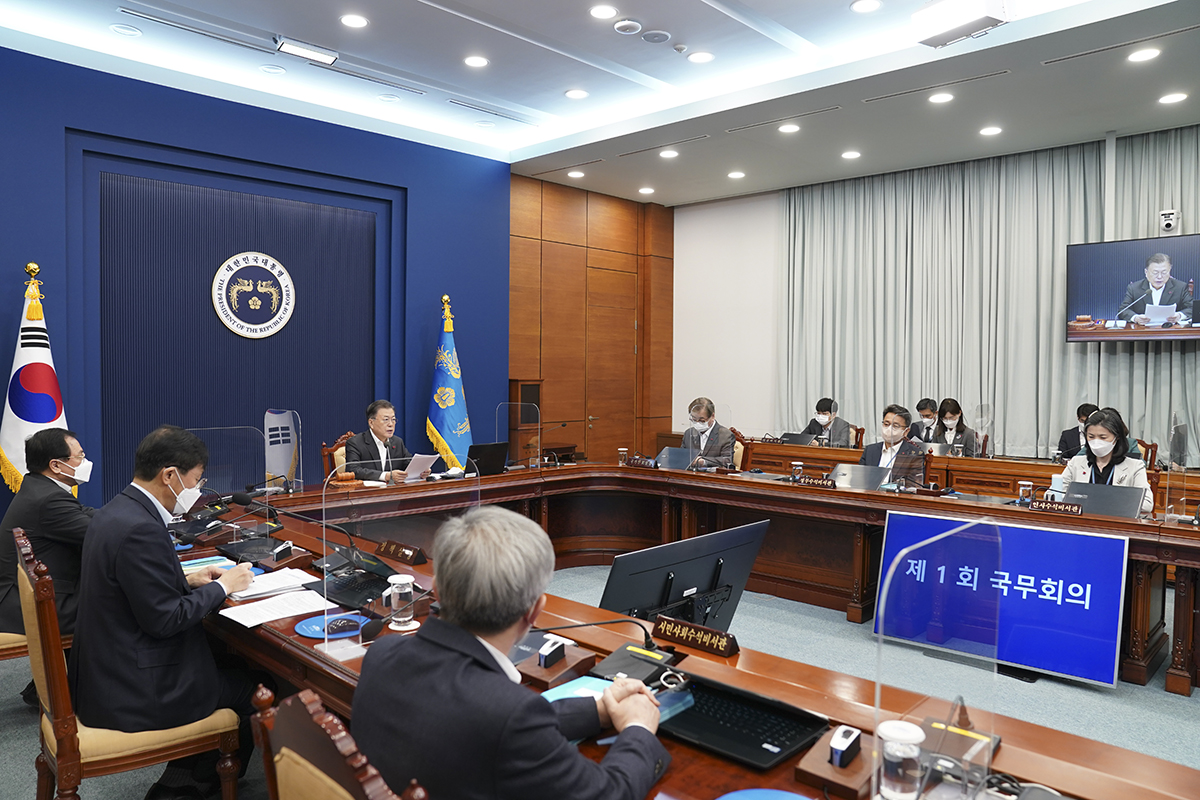 [President Moon Jae-in presides over a state council meeting that deliberated and passed a resolution on the partial amendment of the Jeju 4·3 Special Act at Yeomingwan, Chung Wa Dae, on Jan. 4. Moon said, “It is a relief that justice came true 70 years after Jeju 4·3.”]

The government allocated 181 billion won in the budget to cover the compensation to be paid to Jeju 4·3 victims in the order they were recognized. (A total of 1,800 will receive compensation in the first year of compensation.) Starting from July, the Jeju provincial government will accept compensation applications from around 2,000 people every five to six months.

According to the order in which Jeju 4·3 victims were determined, the applications will be accepted sequentially such as 2,000 people in January 2023 and 2,000 people in June 2023. The applications for compensation will be accepted for three years from this year to 2024, and the compensation will be dispersed over a five-year period ending in 2026.

If the victim has a surviving spouse and three surviving children, for example, the proportional share in the inheritance is calculated as 1.5 for the spouse and 1 for each of the three children.

If the Jeju 4·3 victim was a person who did not have a family relations register as he or she was too young at the time of massacre or his or her birth failed to be registered, the victim’s brother or sister can request compensation. The number of victims recognized as having no family relations register by the provincial government is 894. Of them, 278 victims (31%) were found to have bereaved families. Additionally, 3,547 victims have been identified without any bereaved family member who has the right of inheritance.

In the case of a person who was listed on the Family Census Register (formerly called the family relations register) as an adopted son or daughter, he or she can request the compensation payment. But if he or she is listed only on the genealogy and not on the family relations register, their eligibility for compensation application will be refused. In addition, if a de facto spouse who is determined as a bereaved family member remarries, he or she will lose the right to claim compensation.

Under the Civil Act, each inheritor can apply for compensation individually or through a representative elected from among persons who have the right to an inheritance. The collective application must be accompanied by the certificates of seal imprint from mandators and the certificates of personal signature documents. Even if an inheritor is a person with bad credit, he or she can open an account and apply for compensation. The Jeju provincial government will send text messages to the applicants regarding the progress after the application for compensation payment has been made. 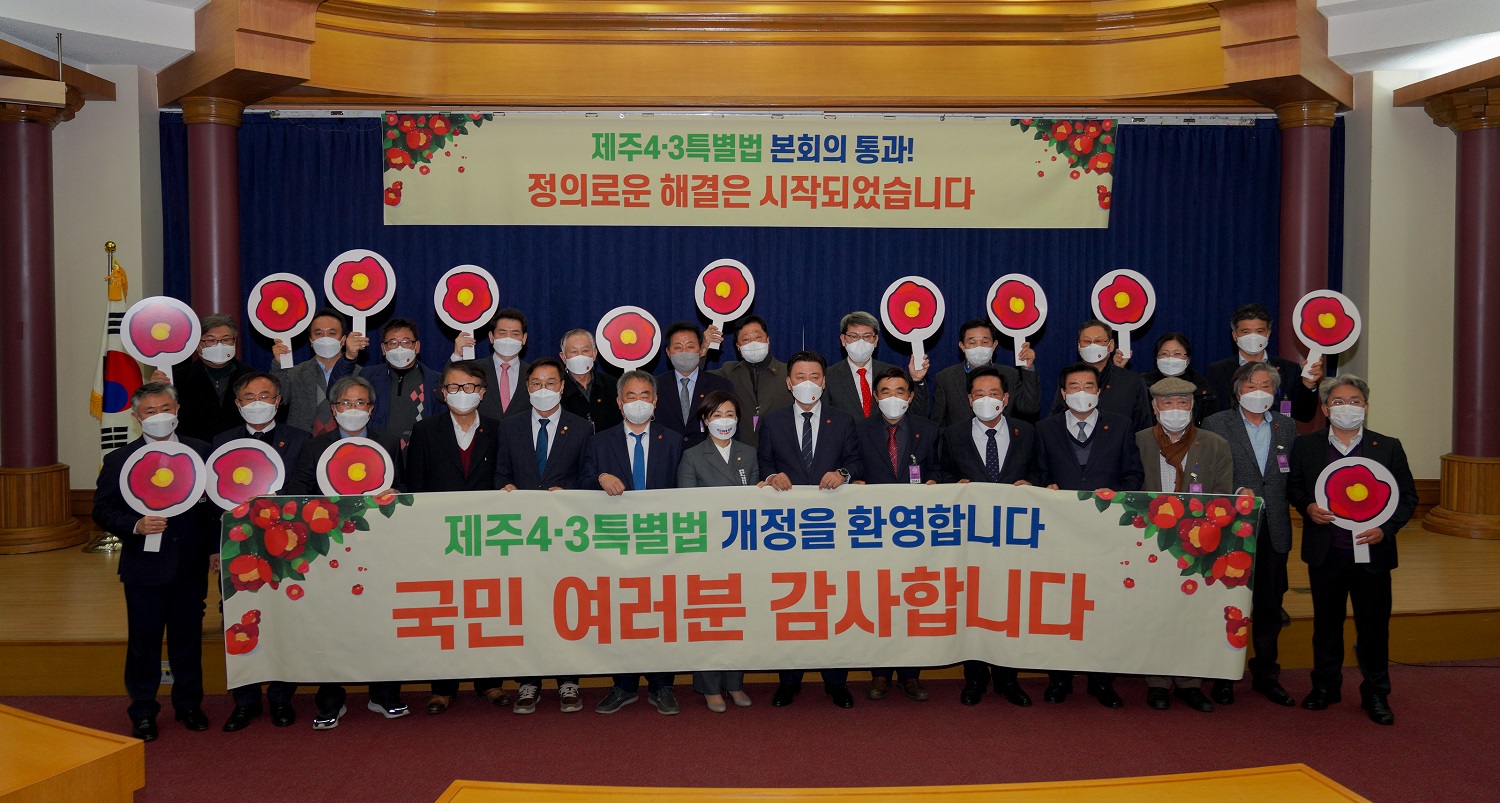 Correcting the altered family relationships should be implemented

The amendment bill also stipulates exclusions from compensation. Those who were determined either as persons of distinguished service for the state or as persons eligible for veteran’s compensation in relation to Jeju 4·3 and then received compensation or veteran’s allowances are excluded from this payment. This is because the current law prohibits duplicate benefits.

Furthermore, those who previously received compensation and indemnification in accordance with the past court ruling and the investigation results of the Truth and Reconciliation Commission will be paid compensation after deducting the amount of money that they have already received.

During the historical turmoil of Jeju 4·3 between 1947 and 1954, there were many cases in which the birth, death, and marriage of Jeju residents were incorrectly registered for fear that they would be harmed by the guilt-by-association system that followed the massacre.

In addition, it was very common for surviving children whose entire family had been exterminated during Jeju 4·3 to enter their names in the family relations register of their grandfathers or their father’s brothers as their children.

If these family relationships are not corrected, the surviving children won’t be able to receive compensation.

Regarding this issue, lawmaker Oh Young-hun (Democratic Party of Korea, Jeju B) said “many Jeju 4·3 victims are in a situation where they are unable to receive compensation due to incorrect family relationships.”

“I will work hard to resolve the issue. After finishing research with an external institute to develop a system for correcting incorrect family relationships, I will propose a bill to settle this issue in the first half of this year. And I’m planning to allocate 100 million won into the budget as a government expense,” he added.