Revised Jeju 4·3 Special Act now effective, but with what improvements?

Senior correspondent with The Hankyoreh

A rally for Jeju residents was held at Gwandeokjeong Square on March 5, 2021, welcoming the passing of the motion on the general amendment of the Jeju 4·3 Special Act.

As of December 2019, the Committee on Discovering the Truth of Jeju 4·3 and Restoration of Honor to the Victims (hereinafter called “the Central Jeju 4·3 Committee”) recognized 14,442 people as Jeju 4·3 victims (14,533 victims recognized as of August 2021). Of the victims, those aged 10 or under and those over the age of 60 accounted for 24.9%. 53% of all villages on Jeju Island were destroyed by fire, and the number of those so-called “lost villages” that disappeared due to the scorched earth operations have been confirmed to reach 134 (Jeju 4·3 Peace Foundation, “Jeju 4·3 Follow-up Investigations Report I”, 2019). The roots of life that had been passed down from generation to generation vanished, leaving tens of thousands of people displaced. The tragedy of Jeju 4·3 did not end with human and material damage.

The historical turmoil that swept over Jeju Island even shook and altered family relationships between the survivors and the deceased. Many orphaned children whose parents had been exterminated or had gone missing during Jeju 4·3 became sons and daughters of their father’s brothers and even their grandfathers. This resulted in cases where the relationships of fathers and their children were changed to those of siblings in the family relations register.

In another case, children who had been born without their parents’ marriage having been registered experienced the loss or missing status of either or both of their parents due to Jeju 4·3 and were re-registered as children of their surviving relatives. There is also a case of a survivor who is registered in her family relations register as being dead due to Jeju 4·3 instead of her younger sister, and lives under her dead sister’s name. These cases demonstrate how the bereaved families of Jeju 4·3 victims have lived for more than 70 years.

Correcting the twisted family relationships remains another “han” (pent-up anger and sorrow) of the victims’ families. In February 2021, the National Assembly passed the motion on the general amendment of the Special Act on Discovering the Truth of Jeju 4·3 and Restoring Honor to the Victims (hereinafter called “the Jeju 4·3 Special Act”). Expectedly, the bipartisan plenary decision would relieve the bereaved families’ pent-up anger and sorrow. The 73rd Memorial Ceremony for the Victims of Jeju 4·3 was also held under the slogan of “The camellia flowers are now in full bloom.” (The fallen camellia flowers symbolize the Jeju 4·3 victims.) However, has the revision of the Jeju 4·3 Special Act blossomed the “camellia flowers” into full bloom as implied by the slogan? Has the pent-up anger and sorrow of the victims’ families been resolved? 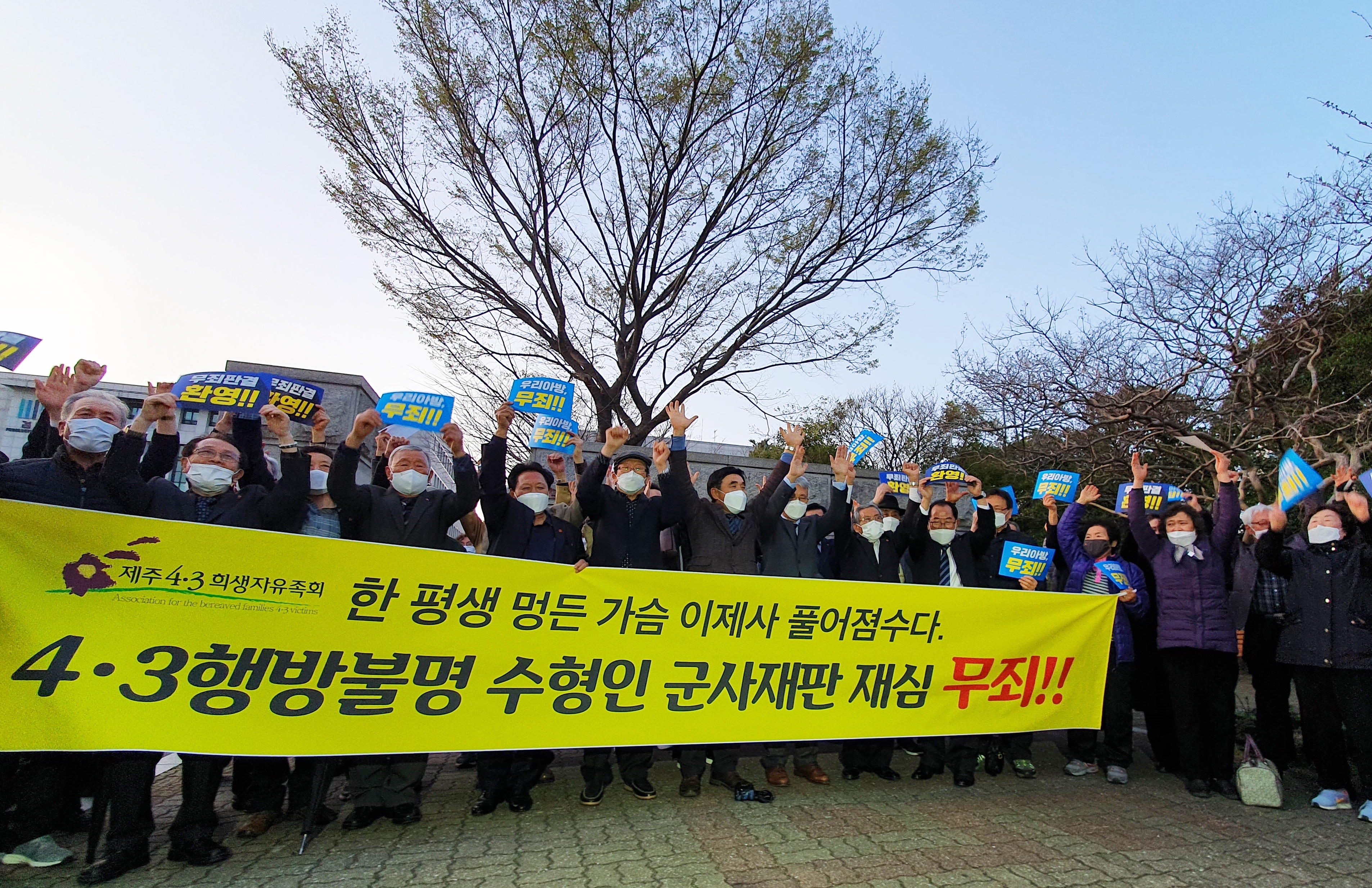 On March 16, the Jeju District Court held the final retrial process concerning Jeju 4·3 convicts, who had to serve jail terms under false accusations due to unlawful courts-martial. The Association of the Bereaved Families of the Jeju 4·3 Victims, including the Jeju 4·3 convicts who had applied for their retrial, are gathered in front of the district court to chant hurrahs after the court’s judgement on the acquittal of the victims’ false charges was announced.

The revised Jeju 4·3 Special Act and the resulting revised Enforcement Decree went into effect on June 24, 2021. With the revision now effective, the roles of the Jeju Special Self-Governing Province and the Working Committee on Discovering the Truth of Jeju 4·3 and Restoration of Honor to the Victims (hereinafter called “The Jeju 4·3 Working Committee”) have also increased. On July 26, the provincial government began to accept applications for preparing or correcting the family relations registers of Jeju 4·3 victims and for the recognition of missing people as victims. The application desk will be open year-round. The preparation or correction of victims’ family relations registers is available under Article 12 of the revised Jeju 4·3 Special Act (“Preparation of Family Relations Registers”). The article stipulates that where a person’s family relations register has not been prepared due to the misplacement of his or her family register during Jeju 4·3, or his or her family relations are incorrectly entered in the victim’s family relations register, the competent authorities may prepare the person’s family relations register or correct matters in the record thereof, according to the determination of the Central Jeju 4·3 Committee. Under the revised law, either the victims or their families may apply for the preparation or correction. However, the provision limited the eligibility of the preparation or correction to those who have been recognized as “Jeju 4·3 victims” by the Central Jeju 4·3 Committee. Victims’ bereaved family members remain ineligible. The provincial government stated that it is allowed to create a death record in the family relations registers of those deceased victims without such a record. It is also allowed to correct the date or place of a victim’s death whose death is recorded in his or her family relations register. The applicants should complete the Application Form for the Decision on Preparing/Correcting Victims’ Family Relations Registers, and submit the form along with other necessary documents, such as a copy of the victims’ Certificate of Removed Entries, by visit or post to the provincial or administrative city office or the competent eup, myeon, or dong-level Community Service Center. The applications are also accepted by the Association of Jeju Residents Overseas or the Republic of Korea’s diplomatic missions overseas.

The Jeju 4·3 Working Committee checks the facts concerning the applications and develops written opinions for each victim to request the Central Jeju 4·3 Committee for the deliberation and decision. After a supplementary investigation and a preliminary review by the related subcommittee, the Central Jeju 4·3 Committee makes a final deliberation and resolution at the plenary meeting. The results are then sent to the Jeju 4·3 Working Committee, which will inform the applicant of the Central Jeju 4·3 Committee’s decision. The applicant would submit the results and other relevant documents, along with the Application Form for the Preparation/Correction of Victims’ Family Relations Registers, at the competent city office or eup/myeon-level Community Service Center for final processing. This implies that the Jeju provincial government and the Jeju 4·3 Working Committee are to play a greater role under the revised Jeju 4·3 Special Act.

The problem would remain concerning the “bereaved families”. Those victims’ families who wish to correct their family relations registers have no means to realize their wishes. This is because the revised act limits the eligibility to the victims. The National Court Administration allegedly experiences difficulties handing the issue as no similar case exists in other laws on unresolved historical issues. A victim’s family member was born after the victim died during Jeju 4·3 and had her name entered in her father’s elder brother’s register. The bereaved daughter’s son said, “My mother is a victim’s family member but is not subject to the correction of her family relations register despite the latest amendment.” The passing of the revised bill “appeared to allow the correction of the incorrect family relations registers but only applies to victims with the Certificate of Removed Entries,” he complained. Another victim’s family member criticized that many people are disappointed with the amendment since it only allows the correction of the date or place of the victim’s death.

Likewise, the provincial government expresses frustration. A local government official said, “They have lived with pain already for 73 years and the issue needs to be settled.” The official explained that the local government plans to collect similar cases and appeal to the National Court Administration once again. “We are looking for ways to reflect the position of the victims’ families when supplementing the legislation,” he added.

The latest amendment also enables retrials of the collective cases of those wrongfully convicted during the unlawful courts-martial, which used to have to be applied for individually by the “surviving Jeju 4·3 convicts” or families of deceased ones. A “special retrials” clause was newly added to the revised Jeju 4·3 Special Act, allowing the Central Jeju 4·3 Committee to recommend that the Ministry of Justice apply for the relevant ex officio retrials and allowed the ministry to make such an application following the recommendation. Approximately 2,530 people are recorded as convicted victims of unlawful courts-martial between December 1948 and July 1949, according to the relevant Court Martial Orders. The clause specifies that the Jeju provincial government and the Jeju 4·3 Working Committee will take responsibility for preparing and reviewing the documents needed for applications to ex officio retrials. The application requires the victims’ basic certificates such as the Certificate of Removed Entries, the Family Relations Register, etc. as well as data provided by the Central Jeju 4·3 Committee and data on prison sentences held by the National Archives of Korea. Field investigation on the facts is also necessary to confirm whether the subject and the victim are the same person. When the provincial government and the Jeju 4·3 Working Committee prepare and submit the documents, the Central Jeju 4·3 Committee will recommend the Ministry of Justice to request for an ex officio retrial. Then, the competent office of the Ministry of Justice (i.e. Jeju District Prosecutor’s Office) will develop guidelines and take measures accordingly. 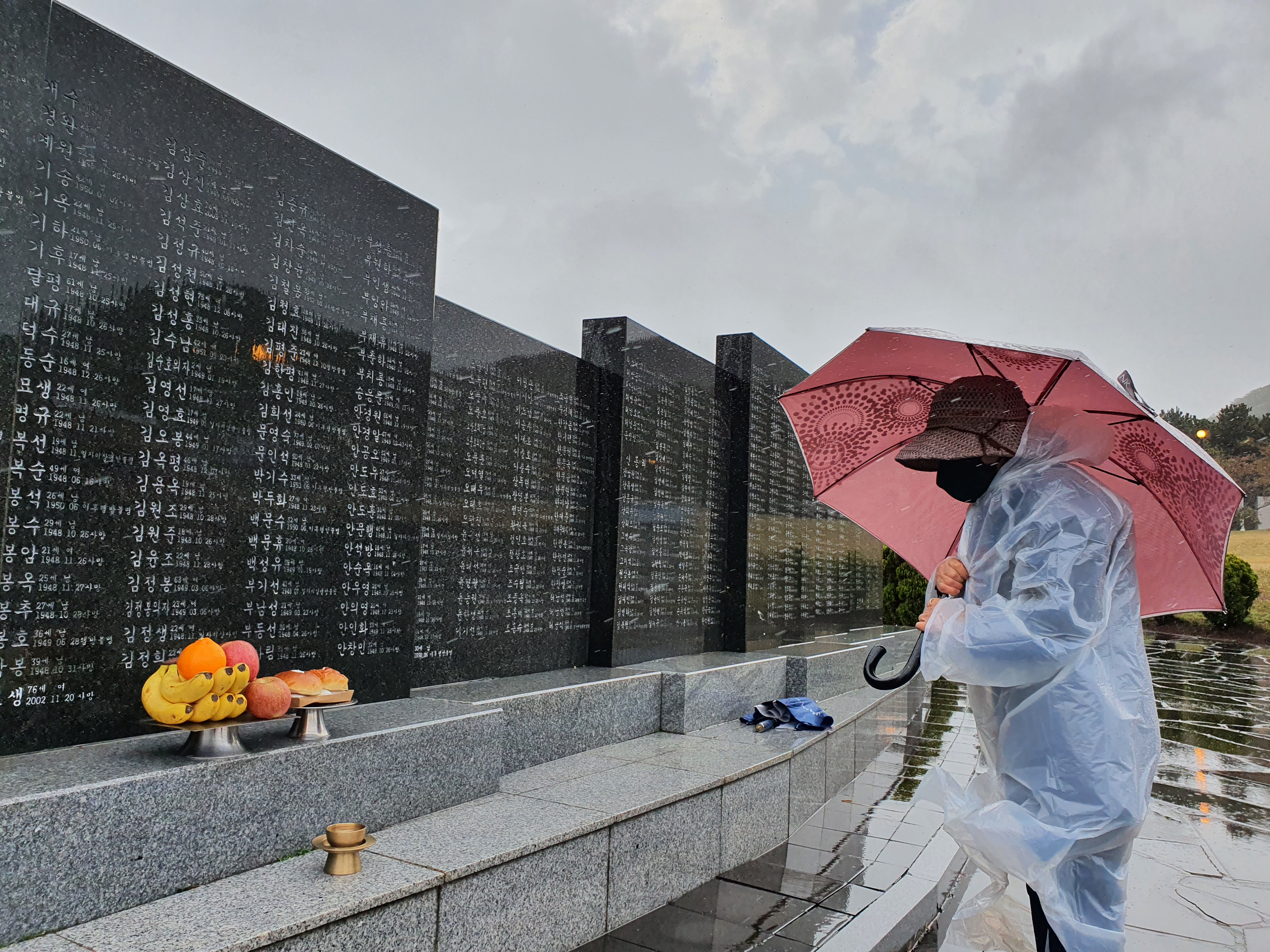 On the rainy day of the 73rd Memorial Ceremony for the Victims of Jeju 4·3, a victim’s family member visits the Headstone Monument Engraved with the Names of the Victims in the Jeju 4·3 Peace Park to pray for rest of the victims.

Lawsuits demanding affiliation to be filed individually; ensuing investigations scheduled for next year

Research contract signed on payment of consolation money for victims

As in the case mentioned above, a child who was born without his or her parents’ report of marriage or of whom either or both parents died due to Jeju 4·3 can file a claim demanding affiliation. Anyone whose parent(s) died during the turmoil of Jeju 4·3 is now eligible to file such a claim within two years from June 24 when the revised act goes into effect. In a case where the deceased parent has been declared missing, his or her child can start the lawsuit within two years from the application for the declaration of disappearance. However, the lawsuits demanding affiliation can only be filed individually by the child concerned.

Additionally, the Jeju 4·3 Peace Foundation is taking steps to undertake the ensuing investigations, which will be conducted from January 2022 to December 2024.

While the original Jeju 4·3 Special Act legislated in January 2000 focused on the “revelation of the truth of Jeju 4·3” and “communal compensation”, the latest revision puts more weight on “individual compensation” and “substantive restoration of honor to the victims”. However, it remains to be seen whether or not the amendment will become “a milestone for a just resolution of the unresolved historical issues”.

“Investigation, Collection, and Studies of Documents are the Key to Education on Jeju 4·3”