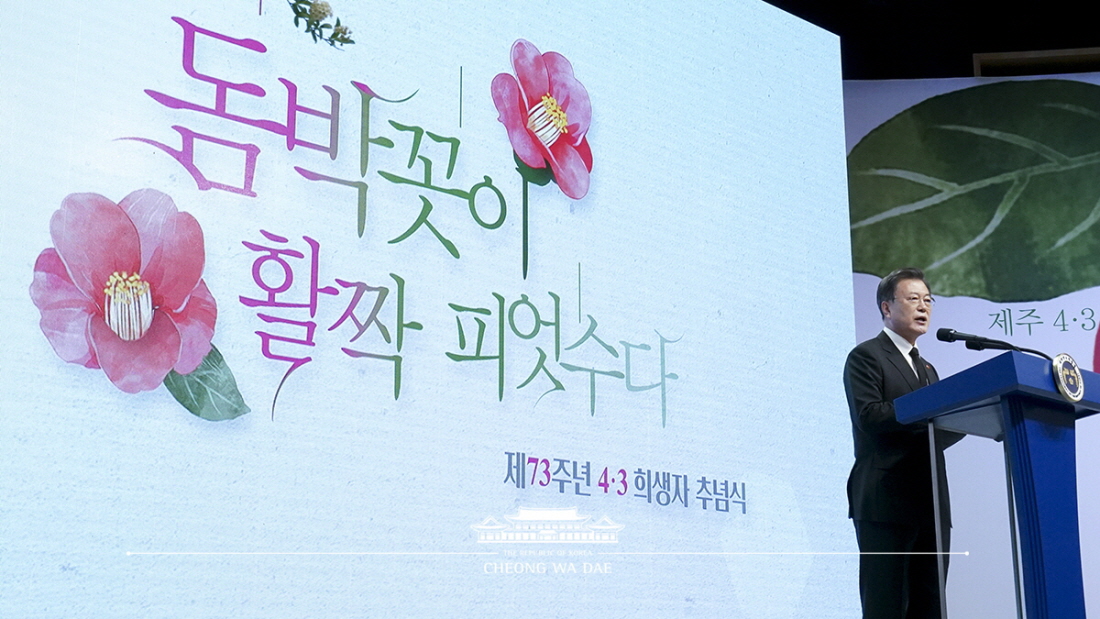 On this memorial day to honor the victims 73 years after the April 3 Incident, spring rain is falling across Jeju Island. I am standing here with a sincere wish that the pain of surviving victims and bereaved relatives will be washed away by the rain.

Also joining me are the Minister of National Defense and the Commissioner General of the Korean National Police Agency. It is the first time for the heads of the military and police to attend an official government memorial ceremony for the Jeju April 3 Incident. This should have happened earlier, but their attendance carries special meaning as it symbolizes a first step. I hope that the surviving victims, bereaved families and residents of Jeju-do will accept the sincere apologies from the military and police in the spirit of tolerance and reconciliation. Their apologies represent the Government’s commitment to reflect on the history of state violence more deeply with introspection. I hope that the suffering of bereaved relatives can be alleviated, albeit slightly. Together with the people, I pray that the souls of the April 3 Incident victims can rest in peace.

It is an immense relief that I can report to you today that the Special Act on Discovering the Truth of the Jeju April 3 Incident and the Restoration of the Honor of the Victims has been amended. The revised law now contains measures to uncover more truth as well as to restore the victims’ honor and support those sacrificed due to state violence. The revision to the Special Act can now shed light on the truth behind the Jeju 3 Incident. The horrible deaths that Jeju islanders had to suffer and the ensuing multi-layered constraints that were imposed upon them must be fully revealed. Only then will the April 3 Incident, which arose from Jeju’s desire for a better country, be able to find the place it deserves in history.

The revised Special Act provides a blueprint to build a home for the history of the Jeju April 3 Incident. We still have a long way to go, but I promise that we will delicately refine and faithfully implement that blueprint which embodies the aspirations of the souls of the April 3 Incident, surviving victims, bereaved families and the people.

The state authorities at that time mercilessly suppressed Jeju residents and drove many to their deaths, branding them as “Reds,” “rioters,” and “rebels” amid charges that they envisioned complete independence and opposed national division. Victims were turned into perpetrators. The military dictatorial regimes used repression and a guilt-by-association system to drown out even the voices of the victims.

However, the Jeju April 3 Incident was never mired in confrontation and sorrow. The surviving islanders tried to regain spring through their own efforts, embracing and caring for each other. They addressed the conflicts with the spirit of reconciliation and unceasingly moved forward toward peace and human rights.

Those who lost everything without a single household item left eked out a living by earning money through the help of neighboring villages. Carpenters lent out their skills, so they could rebuild their homes.

Children who lost their parents were raised by close relatives and neighbors, and the whole village pulled together to carry out major tasks like gathering firewood, plowing dry fields, observing memorial services, holding weddings and building schools. Those who left to live on the mainland and even those who went to other countries sent goods and money to help the people who stayed in their hometowns.

They raised each other up through the spirit of mutual benefit, and finally they were able to bring out the truth of the Jeju April 3 Incident. For the first time in half a century, the taboo surrounding the incident was lifted, and the Kim Dae-jung Administration paved the way for ascertaining the truth and restoring the victims’ honor. This came about thanks to those who summoned the courage to continue their testimonies and take action. In 2003, the Roh Moo-hyun Administration confirmed a government-level fact-finding investigation report. For the first time in history, President Roh Moo-hyun made an official apology to the bereaved families and Jeju residents for the state authorities’ past misdeeds. And, my Administration was able to draw one step closer to the truth of the April 3 Incident. All of this is also attributable to the residents of Jeju and our people, who have long moved forward unwaveringly step by step together with their neighbors.

The revision to the Special Act this time was made possible because all those living joined hands to set the April 3 Incident right in history. A total of 124 institutions and organizations, including Jeju Special Self-Governing Province, its Provincial Council and Office of Education, as well as Jeju residents from various spheres – religious communities, students and political parties – have pulled together with a single goal in mind by launching a joint effort to secure this revision.

The Governors Association of Korea, the Association of Metropolitan and Provincial Council Chairs and the National Council of Governors of Education have voiced consent for the revision of the Special Act. In addition, metropolitan and provincial councils nationwide adopted resolutions to urge the revision, thereby assisting Jeju residents with achieving their long-cherished wish. The National Assembly also joined forces in a bipartisan manner. The revision of the April 3 Special Act, which was agreed upon by the ruling and opposition parties, will be regarded as one of the greatest achievements of the 21st National Assembly. I would like to take this opportunity to express my profound gratitude and respect to all of those from every walk of life who worked together for the revision.

The revision this time paved the way for 2,530 former inmates imprisoned by a military court in 1948 and 1949, to regain their honor through a collective retrial. Already in 2019 and last year, two retrials acquitted 25 surviving former prisoners of their charges, freeing them from the yoke that has been on them for 70 years. On March 16, 333 missing prisoners and two surviving prisoners convicted during a general trial were found not guilty in retrials.

Following murderous interrogations and torture, they went through trials where names were read out as mere formalities and had to live with the stigma of being criminals for over 70 years. Young boys were only found “not guilty” after having grown to be over 90 years old. Special retrials for 2,162 people who lost their relatives and were deprived of honor and dignity, hometowns and dreams still remain. The Government will continue to fulfill its national responsibility by returning those things which were deprived by state violence, albeit slightly, after ascertaining the truth about each and every person, restoring their honor and providing them with reparations and compensation.

Nothing can resolve all the sorrow that has passed, but the Government will do all it can to not only further investigate the truth but also implement follow-up measures to restore the honor of those imprisoned. We will do everything possible to put fair and reasonable standards in place for compensation and reparations as well. Even now, there are many bereaved families anxious about their missing relatives. Some 275 of the 408 people whose remains have been found so far, including the three who were unearthed in Gasi-ri a few days ago, have not yet been identified. Along with the project to exhume the remains, the Government will support DNA identification in a bid to ensure that the deceased are returned to their families without fail.

Since last May, the 4·3 Trauma Healing Center has been operating on a trial basis, and more than 12,000 people visited during the first nine months since its opening. It is rewarding, though belated, that elderly victims and bereaved relatives can bring back memories of that day they have tried not to recall and find closure for their pent-up agony. I am profoundly grateful to those involved in running the Jeju 4·3 Peace Foundation and the 4·3 Trauma Healing Center, who have worked hard to heal the hearts of the wounded. Once the relevant laws are enacted, the Government will upgrade it to a national trauma center and provide support to ensure that the pain felt by many people can be healed entirely.

In the Jeju 4·3 Peace Memorial Hall inside the Jeju 4·3 Peace Park, an unmarked stele still lies on its side. The 73rd spring has come to Jeju-do since the tragedy, but the April 3 Incident still has a long way to go. We do not know what name will ultimately be carved on the stele, but it is clear that the truth uncovered will become a driving force that leads us toward unity, and the honor restored will guide us toward a greater harmony and mutual benefit as well as peace and human rights.

Let us all join hands more tightly until a full-fledged spring finally arrives on Jeju.

The 73rd Memorial Ceremony for the Victims of Jeju 4·3