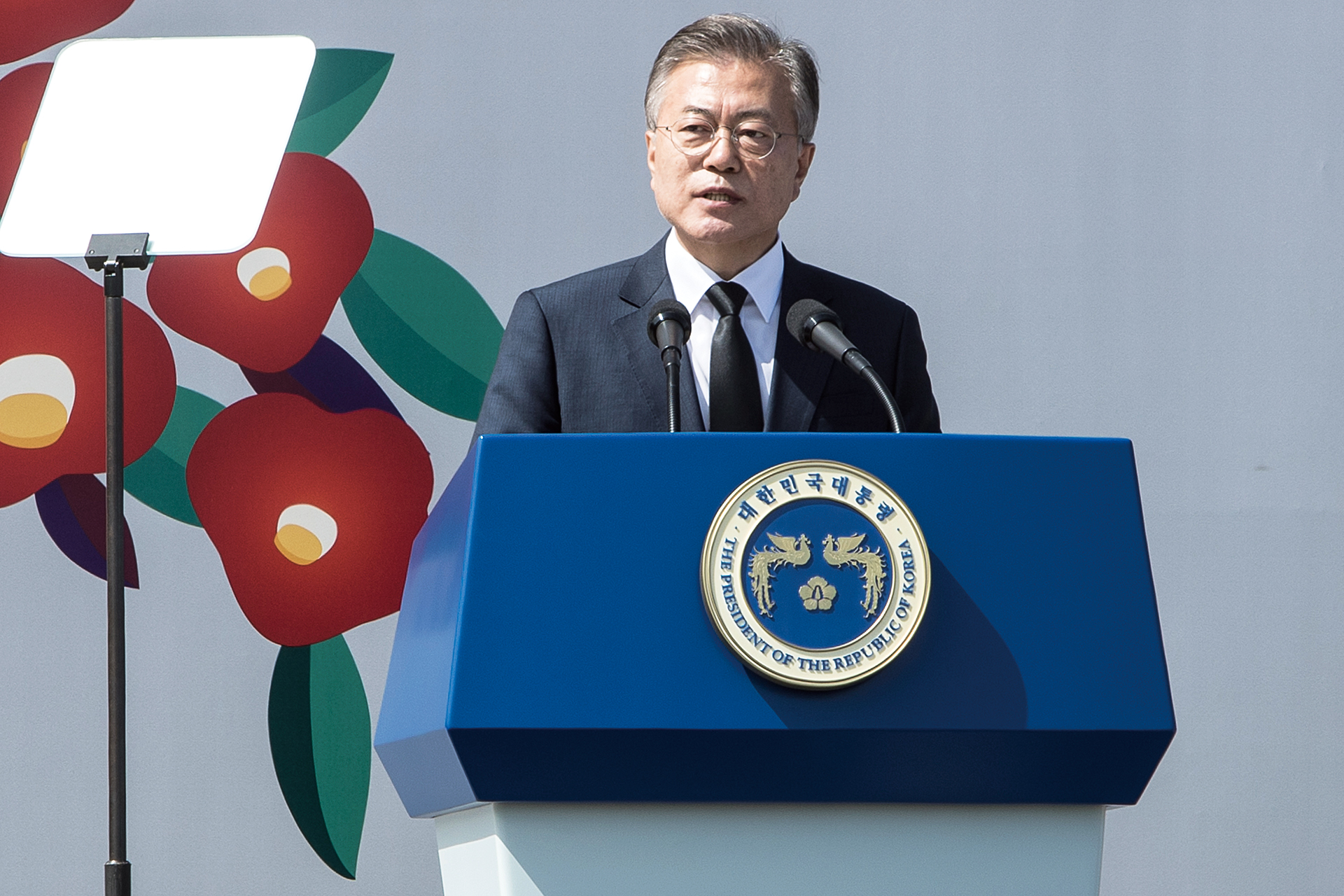 President Moon addresses mourners on the 70th anniversary of the Jeju 4·3 Uprising and Massacre in 2018. Photo by Yang Dong-kyu

President Moon aids an elderly woman down some steps at the All Souls’ Altar, Jeju 4·3 Peace Park, in 2018. Photo by Yang Dong-kyu

The surviving victims and bereaved families of the Jeju April 3 Incident; citizens of Jeju Province,

You have asked over the past 70 years whether there would be spring in this land of Jeju Island that harbors stone walls, fallen camellia flowers and a history of grief.

Today, I want to herald a new spring on Jeju.

Even though the tragedy was prolonged and the pain was so deep that a breeze only brought tears, the spring of Jeju will blossom.

We are gathered here today emerging from years of silence because you have never forgotten what happened on Jeju 70 years ago, and because there have been people who have shared the pain with you.

As President, I offer my deepest sympathy and gratitude to the surviving victims, bereaved families and the citizens of Jeju Province who have revealed their sense of resentment and pain with their hearts and souls and told the truth of the Jeju April 3 Incident.

Innocent civilians were sacrificed here on Jeju in the name of ideology 70 years ago. Those innocents were massacred without knowing what was going on. Even without the knowledge of ideology, they had lived happily together with no thieves, beggars and no walls separating people.

On November 17, 1948, martial law was declared on Jeju Island, and an operation of annihilation was launched focusing on mountainside villages. If any member of a family was unaccounted for, the whole family was killed for being the family of an escapee. More than 95 percent of mountainside villages were burned to the ground. In some villages every resident was massacred.

Between 1947 and 1954, approximately 30,000 or one tenth of the then population of Jeju Island were presumed to be killed.

The border between life and death determined by ideology was not confined to the sites of massacres. Even after all their family members were lost, many islanders had to keep a low profile so as not to be stigmatized as the relatives of rioters.

The pain was passed down from generation to generation in the form of guilt-by-association. The aspirations of children to become soldiers and civil servants working for the country were dampened by the parents of Jeju themselves.

The April 3 Incident created pain on all parts of the Island, but that memory had to be suppressed for survival.

Nonetheless, the truth has not disappeared from the hearts of Jeju islanders during the years of silence. Their tearful efforts to set right the historic meaning of the Jeju April 3 Incident have continued unceasingly.

On April 27, 1960, a group of young people of Jeju Island rose up in the square of Gwandeokjeong pavilion against the unjust power that compelled them to keep silent and forget. Some 1,500 middle and high school students cried out for the truth about the Jeju April 3 Incident and denounced the rigged presidential election of March 15, 1960.

In a short few weeks, the spring of April that year was dashed by the May 16 military coup, but the courage to tell everyone the truth did not dissipate. Numerous organizations related to the Jeju April 3 Incident have constantly brought out what has been lost in memory. The Jeju 4/3 Research Institute, the Jeju 4/3 Solidarity of Provincial Residents, the Jeju People’s Artist Federation and many other associations have taken care to remember the April 3 Incident.

At a time when any act of recalling the Jeju April 3 Incident was considered taboo and bringing it up itself was regarded as seditious, there were some artists who tried to keep the memory alive by engraving the pain of April 3 in their works.

Starting in 1978 when the Yushin dictatorship of President Park Chung-hee was at its peak, a series of novels and poems were published, including Sooni`s Uncle by Hyun Ki-young and the Death of the Crow and Volcano Island by Kim Sok-pom as well as an epic entitled Hallasan by poet Lee San-ha. A series of 50 paintings on the Jeju April 3 Incident was completed over three years by Kang Yo-bae under the title “Camellia Flowers Falling.” In addition, movie directors told stories about the April 3 Incident through their films: Red-Hunt by director Cho Sung-bong, the first documentary dealing with the issue; Jiseul by Oh Muel; Jeju Prayer by Im Heung-soon; Sad Song of Darangshi Cave by Kim Dong-man; and The Unfinished Years by the late director Kim Kyung-ryul. Singer Ahn Chi-hwan also sang a song about the Incident titled “Sleepless South Island.”

The efforts of those artists, who were sometimes arrested and imprisoned, have helped us understand that the Jeju April 3 Incident is not simply an unfortunate tragedy of the past but also a story of our own era.

Finally, we came to realize that the remembering and laying bare of the truth about the Jeju April 3 Incident is part of the process of opening a path toward democracy, peace and human rights.

The Jeju April 3 Incident could be brought to light thanks to those who have long remembered and shared the pain of this tragic incident together with the citizens of Jeju Province. As President, I offer a profound apology for their suffering and appreciation for their endeavors once again.

A path has been paved along which the triumph of democracy will lead to truth.

Building upon that foundation, today I make a pledge to move forward unwaveringly toward the complete resolution of the April 3 Incident. The ascertainment of the truth of the Jeju April 3 Incident and the restoration of the honor of the victims will no longer be suspended or deferred.

In addition, I declare that the truth of the Jeju April 3 Incident has become established as a historic fact that cannot be denied by any group.

The truth of acts of violence committed by the power of the state has to be disclosed properly so that the injustice against the victims can be resolved and their honor can be restored.

To this end, the excavation of remains will be continued till the end so that the whole truth will be uncovered.

I will make my utmost efforts to implement Government measures to heal the wounds and pain of the victims and their bereaved families.

I will also actively consult the National Assembly on issues that require legislation, including the distribution of restitution and compensation and the establishment of a National Trauma Center.

The complete resolution of the April 3 Incident will lay a solid foundation for reconciliation and unity, peace and human rights, which the residents of Jeju Province and all Korean people hope for.

Jeju Island is now reviving as a land of peace and life after surmounting untold pain.

Standing here before the spirits of the April 3 Incident, we confirm again today that peace and mutually beneficial prosperity can only be obtained with truth, not ideology.

Fierce confrontation between left and right resulted in this horrible tragedy of history, but the victims of the April 3 Incident and residents of Jeju Island have prevailed over the distrust and hatred created by ideology.

The late Oh Chang-gi was wounded by gunshots fired by the military and police at the time of the April 3 Incident, but he took part in the Battle of Incheon by volunteering to join the Marine Corps after the outbreak of the Korean War. The late Kim Tae-saeng who lost his wife, parents, mother-in-law and a sister-in-law during the April 3 Incident joined the military after writing a pledge of his devotion to the country in blood.

Young people who were falsely accused of being communists during the April 3 Incident defended their country in the face of death.

Ideology was nothing more than a cause that justified the massacre. The residents of Jeju have overcome the tragedy created by ideology through reconciliation and forgiveness.

In Hagui-ri village, Jeju Province, memorial stones for the fallen heroes who died protecting the homeland and other memorial stones for the victims of the April 3 Incident were erected to create a memorial altar. The monument was set up to convey a message that all were victims and are thus forgiven. In 2013, the Association for the Bereaved Families of April 3 Victims and the Jeju Police Veterans Association, which had had the most conflict with each other, announced their unconditional reconciliation.

The olive branch extended by residents of Jeju now needs to develop into reconciliation among the entire public.

At this place today, I want to appeal to the Korean people.

If neither righteous nor fair, conservatives, progressives, or any other camp cannot be in the interest of the people.

The shadow of hostility cast by ideology in every corner of life should be removed and joint efforts need to be made so that the dignity of humanity can blossom. This is the message told to us by the volcanic cones on Jeju Island today.

Victims of the April 3 Incident, bereaved families and fellow countrymen,

Despite deep scars, Jeju Island championed peace and the value of human rights over the past 70 years. This will lead us to peace and coexistence on the Korean Peninsula and turn into a message of peace for the whole of humanity.

The aspiration for permanent peace and human rights will never disappear. The ensuring of that is a historic duty imposed upon me as President.

I hope that the memorial ceremony today will give comfort to the souls of those who died during the April 3 Incident and other victims, and serve as a historic milestone for the people.

Everyone, a new spring is on the way to Jeju Island.

Thank you very much.

President Moon and his wife, Kim Jung-sook, pay their respects to the victims of Jeju 4·3 at the 70th anniversary memorial service. Photo by Hyojadong Photo Gallery