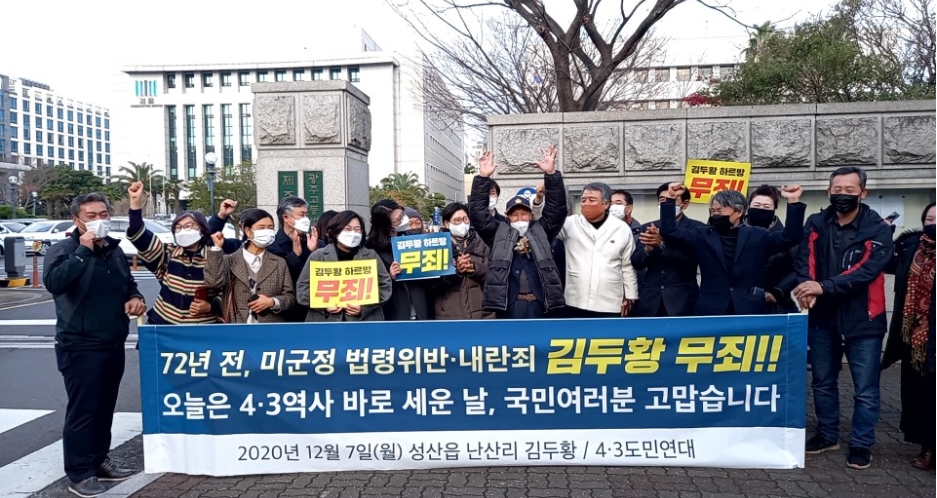 The retrial process is coming to an end for those who served jail terms following convictions handed down 72 years ago during unlawful courts-martial held amid Jeju 4·3.

In January of last year, a judge during a retrial of decades-old convictions dismissed the indictment of 18 people found guilty and sent to prison by the illegal courts-martial seven decades ago. With the legal precedent now set, attention turned to the second retrial where prosecutors have asked the court to acquit all eight claimants.

On Oct. 8, Criminal Chamber 2 of Jeju District Court accepted the request for the retrial for the claimants, seven who were convicted by court-martial rulings and one who was imprisoned by a general court.

On Nov. 16, 1948, police arrested Kim who was then 20 years old and knew nothing of the reason for his arrest, after which he was assaulted and tortured during the interrogation. Kim was then confined to the Mokpo prison on the mainland without a formal trial, thus depriving him of the knowledge of his charge or sentence.

In ordering the commencement of the retrial, the judicial panel stated: “The retrial system must be the means that a defendant would seek in the last resort to guarantee his or her human rights are protected. The claimants for the retrial including Kim Du-hwang testified in common that unlawful detention and cruel treatment of the prisoners had occurred during Jeju 4·3. The List of the Convicts documented that more than 2,000 people were put to military trial by two courts-martial. The court considered that it is deemed impossible to lawfully convict thousands of people in that short period of time.”

Concerning Kim’s case, the judicial panel ruled that there is reason to commence his retrial because “although the maximum period of detention was 40 days at the time, his detention period exceeded the statutory period and the related calculation confirms that his detention was unlawful.”

Of the eight claimants, Kim Myo-saeng, 92, female; Kim Yeong-suk, 90. female; Kim Jeong-chu, 89, female; Song Sun-hee, 95, female; and Jang Byeong-shik, 90, male, were convicted by courts-martial and applied for retrial. The news of the latest retrial order was unable to be heard by the other claimants Byeon Yeon-ok, 91, female; and Song Seok-jin, 93, male; because they died in March and July of this year, respectively.

On Nov. 16, the prosecution asked the judicial panel of the Criminal Chamber 2 of Jeju District Court to exonerate all eight claimants who filed the lawsuit.

“Listening to the defendants’ experiences and reviewing the related materials helped us learn a lot about the previously unrecognized historical significance of Jeju 4·3 and its impact on Jeju residents,” the prosecution said following the order. “We express gratitude to the judicial panel for ordering the commencement of the retrial and remaining patient until the final trial under the circumstances where virtually no trial record such as a written indictment or a written judgment remains. We also appreciate that the defendants endured the torment for more than 70 years.”

The prosecution then recognized Jeju 4·3 by saying: “During Jeju 4·3, more than 25,000 Jeju residents lost their lives and some 300 villages and 20,000 houses were burned, and this devastating tragedy occurred in the name of state power. Irrespective of the ideological controversy over Jeju 4·3, no one would be able to deny the fact that innumerable Jeju residents were killed in the time of chaos after gaining national independence and that their families had to live with painful memories after burying their loved ones in their heart.”

Concerning Kim Du-hwang, the prosecution explained: “Kim’s case is significant in that it is the first application for retrial on the conviction by an ordinary court during Jeju 4·3, which makes it dissimilar to the convictions by courts-martial. Without additional records of his lawsuit other than the written judgment, there exists no evidence to prove the facts based on which the indictment was made.”

The prosecution then asked the court to exonerate Kim by saying, “We hope that his retrial will help him regain his honor and heal at least a portion of the pain and suffering of the Jeju 4·3 victims.”

Regarding the seven other claimants, including the two who recently passed away, the prosecution explained: “Although the defendants were deemed to have committed insurrection or violated the Articles of War, there exists no proving material or evidence. Given that certain standards were reduced for the indictment regarding the Yeosu-Suncheon Incident and other cases, no significant impact is expected on guaranteeing the defendants’ right to defense.”

In the final statement, the panel of judges said, “The defendant, who was a young man aged 20, was punished under a false accusation amid the extreme ideological conflict immediately after national liberation. We hope that our judgment will be a starting point to resolve his lifelong resentment and sorrow.”