The 11th Jeju 4·3 Peace Forum: Memories of Jeju 4·3 and Solidarity of Documents 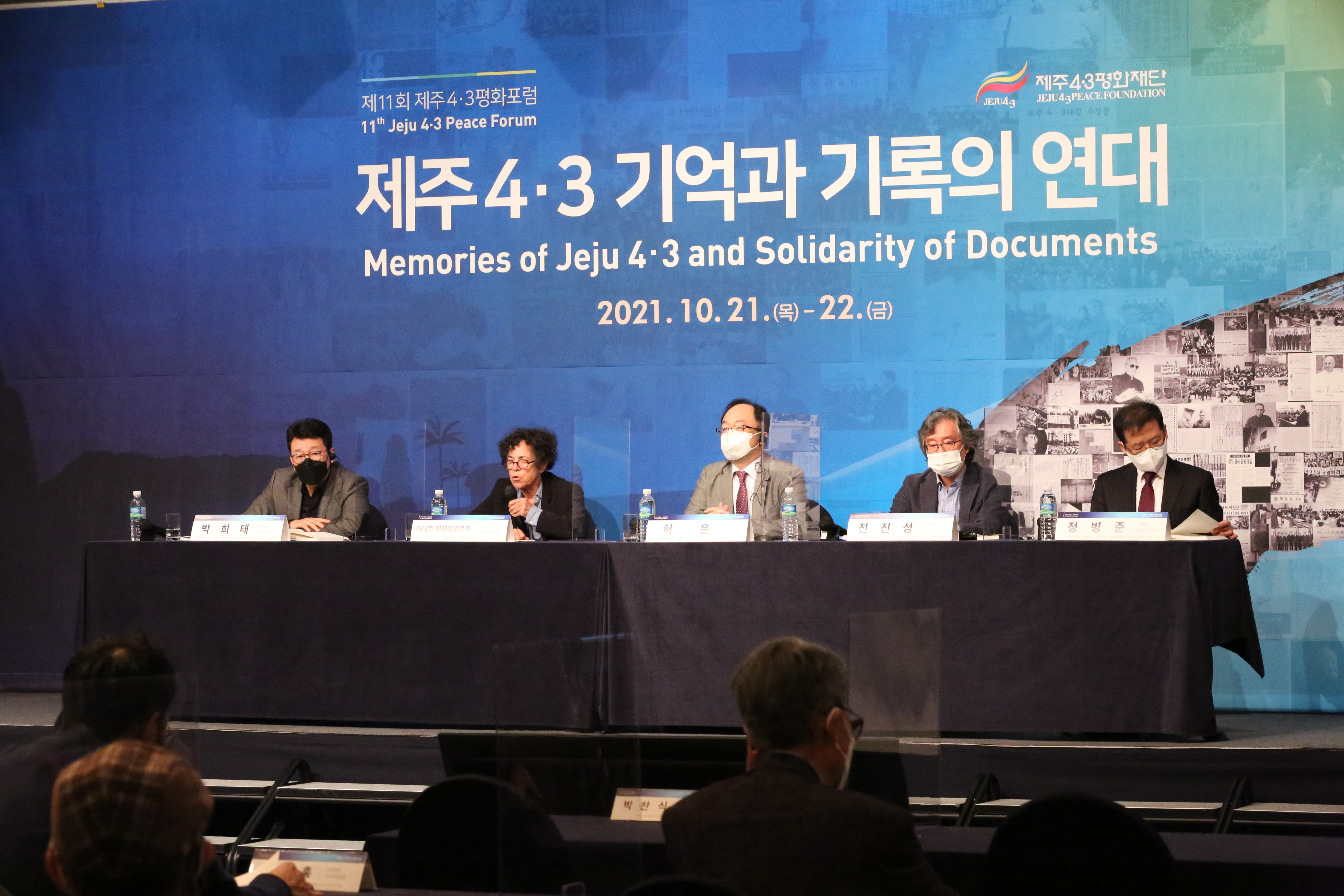 Session 3 “Solidarity for Documentation and Inheritance of Memories”

Jeju 4·3 and its subsequent history afterwards left the memories and the documents. The long journey of passing through darkness toward light for more than 70 years is now illuminated by the archives of testimonials substantiating the event of the past years.

On Oct. 21-22, the Jeju 4·3 Peace Foundation hosted the 11th Jeju 4·3 Peace Forum in the conference room of Jeju KAL Hotel. The forum was organized to illuminate the achievements of Jeju 4·3-related documents and their significance in discovering the truth of Jeju 4·3. Under the theme “Memories of Jeju 4·3 and Solidarity of Documents”, the foundation prepared the event as an opportunity to share the documents related to Jeju 4·3 as official archives of the historical case and the truth-finding movement afterwards.

The forum started at 5 p.m. on Oct. 21 with the keynote speech titled “4·3 and Today”, presented by Han Hong-koo, director of the Demos Archives at Sung Kong Hoe University. Han touched upon the history of Jeju 4·3, which had been thoroughly erased outside Jeju Island, saying that “Jeju 4·3 has not ended because the tragedy that caused agony to the people of Jeju Island at the time has left lingering pains for those who survived the turmoil, as well as the victims’ family members. The historian then emphasized that the history of Jeju 4·3, which had long been referred as a riot by the military regime, was regenerated through the memories of Jeju residents and eventually turned into the documents of today.

At 10 a.m. the following day, the forum featured three sessions. Session 1, titled “Documentation of Memories, and UNESCO”, was moderated by Yang Jeong-shim, head of the foundation’s Investigation and Research Team. Jan Bos, chair of the UNESCO Memory of the World (MoW) Register Subcommittee, gave an online presentation titled “The Memory of the World Programme and Documents as Testimonies of History”. The specialist emphasized the tremendous power of documents, with a focus on the influence of a documentary heritage with the value of historical proof as well as of materials for research and education. The Jeju 4·3 Peace Foundation should preserve the various documents related to Jeju 4·3 as a documentary heritage and guarantee its accessibility to all people, he said.

Kim Ji Wook, research fellow at the National Debt Redemption Memorial Association, briefed the participants on the inscription of the Archives of the National Debt Redemption Movement on the UNESCO MoW Register and the significance of the process. Kim pointed out that Japan pays 8% of the UNESCO Regular Budget, and meanwhile a document with potential conflicts of interest between countries must fulfill the requirement of reaching inter-state agreement in order to be listed on the UNESCO MoW Register. “Due to this, South Korea has failed to have a documentary heritage added to the list since 2019,” he said. The history researcher then suggested the factors that qualify the Jeju 4·3-related documents as a documentary heritage candidate for the UNESCO MoW inscription. According to Kim, the documents related to Jeju 4·3 have potential because they feature a universal but unique theme which can be academically objectified, while drawing national public attention.

Session 2 was held under the topic “History and Preservation of Jeju 4·3-Related Documents”, moderated by Lee Kyu-bae, president of the Jeju 4·3 Research Institute. The session presenters included Park Chan-shik, director of the Center for Jeju Historical Studies at the Jeju Future Research Institute and Kwak Geon-gong, professor in the Archives Management Program at Hannam University.

Park’s presentation was titled “A Suitability Review of the Archives of Jeju 4·3 as a UNESCO MoW Documentary Heritage”, where he suggested the identifying parameters for the Archives of Jeju 4·3. According to his definition, the Archives of Jeju 4·3 refers to all pertinent resources including, but not limited to, text-based items, audiovisual items such as photographs and films, and artifacts associated with the people involved in the incident that have been documented and/or produced concerning the massacre of tens of thousands of residents during the armed clashes between the civilian armed forces and the state-led counterinsurgency forces which took place on Jeju Island, the Republic of Korea, from March 1, 1947, to Sept. 24, 1954, as well as the subsequent process of clarifying the truth related to the incident and restoring honor to the victims. The Jeju 4·3 expert also called for the establishment of the “Jeju 4·3 Archives Center” where the Archives of Jeju 4·3 will be comprehensively managed and preserved. The systematic management of the Archives of Jeju 4·3 at the proposed center will be needed to prepare for the UNESCO MoW inscription, he emphasized.

In the following presentation titled “Archiving Strategies of Documents Related to Jeju 4·3”, Kwak classified the characteristics of Jeju 4·3-related documents and suggested using an archiving method applied with “documentation strategies”. This places importance on the systematic management of the Jeju 4·3-related documents by determining a clear range of documentation and formalizing the document-collecting process so that social activities and history can be reconstructed into a documentary heritage.

The final session of the forum was titled “Solidarity for Documentation and Inheritance of Memories” and moderated by Heo Eun, professor in the Department of Korean History at Korea University. The session featured five presentations, which began with “Witnesses and Archives”, given by Annete Wieviorka, research director at the French National Centre for Scientific Research. Wieviorka is a specialist in the Holocaust and the history of Jewish people in the 20th century. During her presentation, the historian conveyed the importance of data that testify to the times. She explained that data that support various types of testimonies in each era, and the sociological interpretation of the data, have significance. According to her assessment, the testimonies are important data that put individuals at the center of history and society and enable individuals to publicly embody history.

The second presenter, Jeon Jinseung, professor in the Department of Social Studies Education at Pusan National University, addressed the conceptual aspect in his presentation, titled “Can Historical Truth Be Represented? – Historical Relativism, Trauma, and the History of Human Rights”.

Jeon’s presentation was followed by “Archived Video Images: A Catalyst for Transition from Documents to Memories”, given by Park Heui-tae, professor in the Department of French Language and Literature at Sungkyunkwan University. Focusing on the value of archived video images, Park explained that the technical ability of the camera to reproduce an object without human intervention plays an important role in giving credibility to video images, such as movies as a record of reality and facts. “The content recorded in a video image, which has secured credibility, has the power to persuade the public, and archived video images can be used in various ways,” he said.

The last speaker of the session was Jung Byung Joon, a professor in the Department of History at Ewha Womans University. Jung spoke under the title “The Current Status of Documents from the United States Army Military Government Period and the Future of Documents Related to Jeju 4·3.” During his presentation, Jung assessed the struggle for the truth of Jeju 4·3 as one of the most active and exemplary activities, saying that it is the result of concerted efforts of victims and their families, local society, civic groups, academia, media, and politicians. With the efforts to synthesize the documents related to Jeju 4·3, the significance of the movement as well as the lessons learned will go beyond Jeju Island to the Korean nation, the East Asian region, and to the whole world, he said. The history professor emphasized that it is needed at this time to systemize the documents related to Jeju 4·3, given their historical value. “Although Jeju 4·3 occurred on Jeju Island, the tragedy secures historical significance and recognition in the histories of Korea, East Asia, and the world,” he noted.

The 11th Jeju 4·3 Peace Forum was held in a meaningful year when the general amendment bill on the Jeju 4·3 Special Act was passed at the National Assembly. The on-site forum could not accept many participants from the family members of Jeju 4·3 victims due to the limited number of attendees at the event because of the quarantine guidelines. However, the real-time streaming of the event on YouTube created momentum for recognition of the values and historical status of the documents related to Jeju 4·3 on a broader scale, beyond Jeju Island.

“Whatever the pressure of the time, whatever the situation in Korea and in world politics, whatever the fears and insecurities — what happened [during the Jeju April 3 Incident] was not acceptable.” (Dan Smith)

A fresh start for Yeo-Sun 10·19: Out of the darkness into light