A fresh start for Yeo-Sun 10·19: Out of the darkness into light 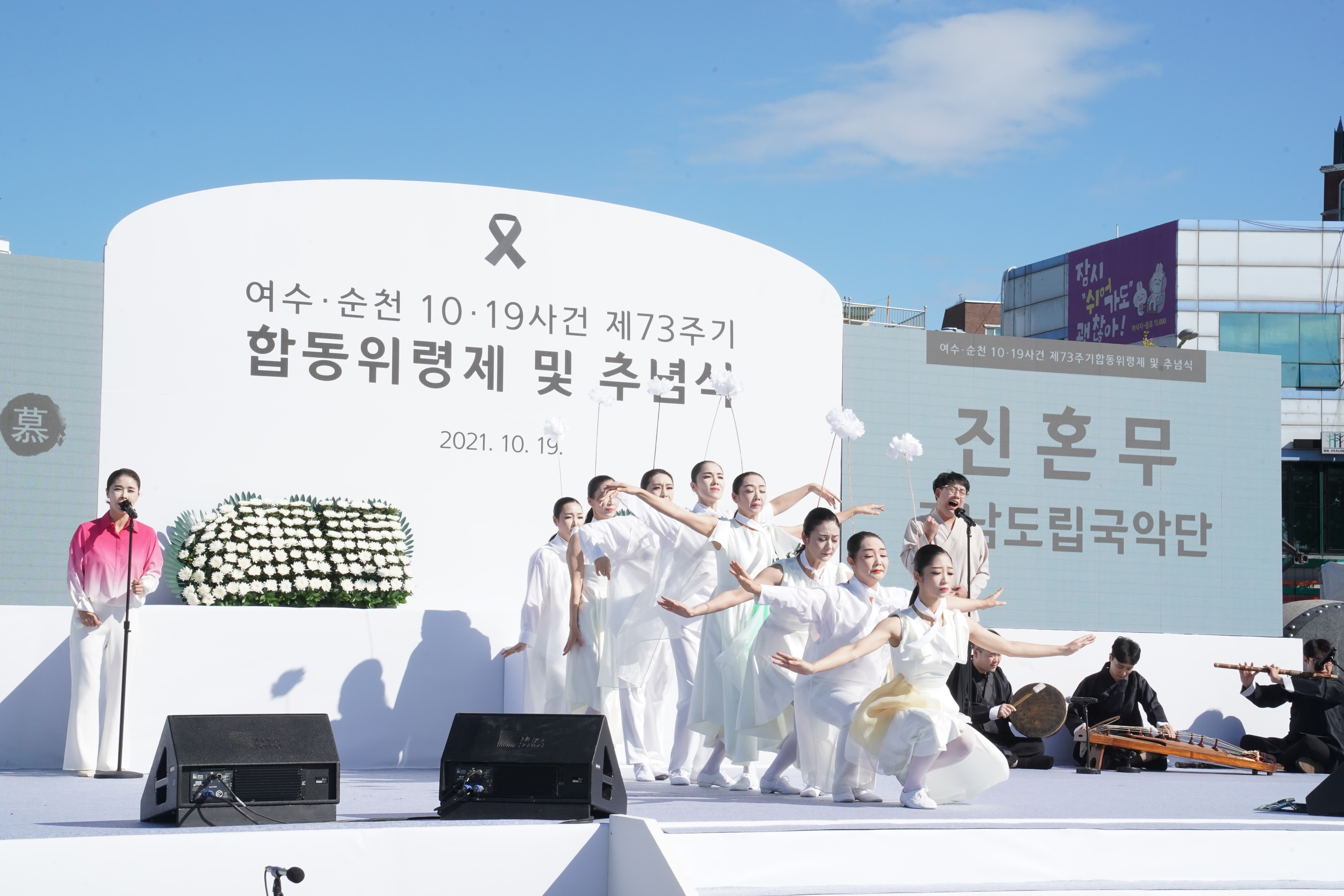 Early in the morning on Oct. 19, 2021, citizens started to gather one by one in Yi Sun Sin Square in Yeosu, where the sculpture of the Geobukseon [turtle ship] stands. The badge attached to each visitor’s jacket stood out, as the camellia flower design symbolizes the victims of the October 19 Yeosu-Suncheon Incident (Yeo-Sun 10·19). As if proving the ‘twinship’ relations, Yeo-Sun 10·19 and Jeju 4·3 continue to have close ties across the sea even after 73 years have passed since the two events broke out in 1948. Before the memorial ceremony, the National Assembly decided during its plenary session on June 29 to pass the bill on the legislation of the Special Act on Discovering the Truth of the Yeosu-Suncheon 10.19 Incident and Restoration of Honor to the Victims (Yeo-Sun 10·19 Special Act). The monumental achievement after 73 years heightened the atmosphere of the memorial event.

The sky was blue and the weather was clear on the day of the joint memorial ceremony commemorating the 73rd anniversary of the Yeo-Sun 10·19. The ceremony was co-hosted by Jeollanamdo Province and the Association of the Bereaved Families of Yeo-Sun 10·19 Victims. Due to COVID-19 quarantine guidelines and social distancing rules, the number of participants was limited to 90. 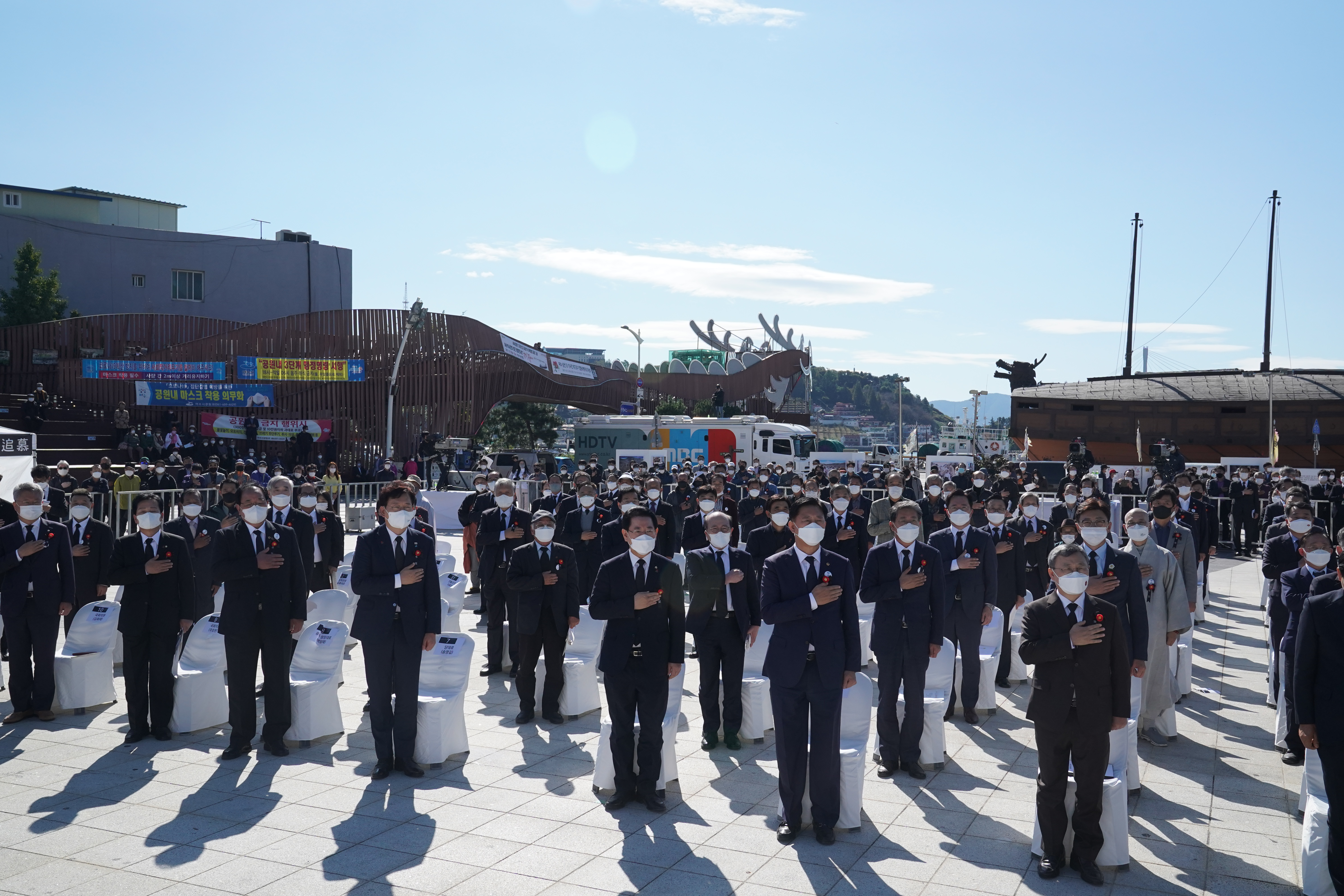 Key figures in the Yeosu and Suncheon regions participated in the ceremony, including Kim Yung-rok, governor of Jeollanamdo Province, Kim Han-jong, chairman of the Jeollanamdo Provincial Assembly, Jung Keun-sik, president of the Truth and Reconciliation Commission, Jang Suk-woong, superintendent of the Jeollanamdo Provincial Office of Education, and Kwon O-bong, mayor of Yeosu City. The participants from political circles featured Rep. Song Young-gil, Leader of the ruling Democratic Party of Korea, and lawmakers from the region’s constituencies, including Rep. Joo Cheol-hyeon, Rep. Kim Hoijae, and Rep. Lee Yongbin. President Moon Jae-in, Prime Minister Kim Boo-kyum, and Lee Jun-seok, head of the People Power Party, sent floral tributes to express their consolation for the souls of the deceased and their families.

The Jeju 4·3-related authorities and organizations also sent a delegation including Lee Seok-moon, superintendent of the Jeju Special Self-Governing Provincial Office of Education, Oh Im-jong, chairman of the Association of the Bereaved Families of Jeju 4·3 Victims, Yang Jo Hoon, president of the Jeju 4·3 Peace Foundation, and Huh Young Seon, director of the Jeju 4·3 Research Institute.

Prior to the memorial ceremony, condolences were paid through a requiem dance performed by the Jeollanamdo Provincial Institute of Korean Traditional Performing Arts, the reading of a story told by a victim’s family member, and a memorial choral singing performed by the Yeosu City Choir.

“My grandmother used to feel saddened by the fact that the lack of education and the resulting poverty recurred in our family, generation after generation. She had waited all her life for her missing husband, living a harsh life in silence. She passed away this year, when the bill on the Yeo-Sun 10·19 Special Act was passed at the National Assembly. Now that the bill has been passed, I hope that my grandparents will put down all their worries, pains, and sorrows and be reunited in the other world, visiting Yeosu and Suncheon on a fine spring day. Grandma, I love you and thank you. May you rest in peace.”

Seo Yeong-no, a victim’s grandchild, read a letter, titled “Dear Grandpa and Grandma”, and shared the story of his grandparents who were the victims of ideological conflict.

The memorial program followed the consolatory event, under the theme “Yeo-Sun 10·19: Flowers of Truth Are in Bloom”. At 10 a.m., the memorial ceremony began with a siren sounding throughout Yeosu City, requesting a silent tribute to be paid to the victims. The event then proceeded with the screening of a video, after which key participants laid flowers and burned incense on the altar for the deceased. The floral tribute and incense burning was followed by memorial speeches by distinguished guests as well as stage performances by the Jeollanamdo Provincial Institute of Korean Traditional Performing Arts.

Prime Minister Kim said in his memorial video message that Yeo-Sun 10·19 remains an unresolved issue in contemporary Korean history. Kim described the case as “the most painful historical event”, which must not be glossed over just because decades have passed. The leader of the ministries also promised that the government will spare no effort in exonerating the victims and their bereaved families through the activities of the Committee on Discovering the Truth of Yeo-Sun 10·19 and Restoration of Honor to the Victims (Yeo-Sun 10·19 Committee), which is slated to be launched in 2022.

Song, the leader of the Democratic Party of Korea, also stated that his party members will make incessant efforts until the scars from Yeo-Sun 10·19 are fully healed and until the honor of the victims is restored. The five-term legislator also received an ovation for his pledge to work for the designation of Oct. 19, the day Yeo-Sun 10·19 began, as a national memorial day. As the presidential election is taking place in less than a year, the ruling party leader expected that he will be able to attend the joint memorial ceremony next year, accompanying the fourth president from his party.

Park Seong-tae, chairman of the Association of the Bereaved Families of Yeo-Sun 10·19 Victims, said he was three years old when his father passed away due to Yeo-Sun 10·19. The 76-year-old survivor performed a kneeling bow, expressing his gratitude for the enactment of the Yeo-Sun 10·19 Special Act.

Yeo-Sun 10·19 was sparked on Oct. 19, 1948, when members of the nation’s 14th constabulary regiment based in Shinwol-dong, Yeosu City, rose up against the order to be dispatched to Jeju for counterinsurgency operations during Jeju 4·3. The suppression of the uprising caused the deaths of more than 10,000 innocent civilians by state power. Dubbed “a twin incident” of Jeju 4·3, the contemporary historical tragedy is considered a case to which Jeju residents owe a debt of gratitude.

Jeollanamdo Province held other events to commemorate Yeo-Sun 10·19, such as the opening of an online memorial hall on the websites of the provincial government and the region’s municipal offices. Yeosu City also publicized the history and truth of the incident to its citizens by hosting a range of programs, including an exhibition of original paintings from the recently published historical graphic novel “Until Camellia Flowers Blossom”, solo exhibitions of Park Geum-man and Kang Jong Yeol, a performance of the opera “Silence in 1948”, an exhibition of Yeo-Sun 10·19 archives at the Yeosu Municipal Library, a peace concert commemorating the 73rd anniversary of Yeo-Sun 10·19, and the launching of the online memorial hall.

The second round of the forum on the enforcement decree of the Yeo-Sun 10·19 Special Act is being held.

On Oct. 18, 2021, the second round of the forum was held at the Yeosu Culture Hall to discuss matters to be addressed regarding the enforcement decree of the Yeo-Su 10·19 Special Act following the legislation and promulgation of the act.

The forum was hosted by the Yeosu Municipal Council and the Pan-National Committee on the Truth and History of Yeo-Sun 10·19 (Yeo-Sun 10·19 Pan-National Committee), and was organized by the Yeosu Community Research Institute (YCRI). The event was prepared to complement the new statutes, based on the ideas and opinions that were gathered from the participants of the first forum and from other experts in different fields of society. The session was moderated by Lee Youngil, the YCRI president who has studied the case for the past 23 years. Lawyer Jang Wan-ik, who presented an in-depth analysis of the special act in the first forum, was invited for the second presentation. Jang emphasized the roles of the subcommittees and their chairs in running the Yeo-Sun 10·19 Committee, pointing out that they are to be directly involved in the tasks of discovering the truth of Yeo-Sun 10·19. The lawyer contrasted this with the setup of the Jeju 4·3 Committee, which lacks a separate statutory ground for its subcommittees and assigns the Jeju 4·3 Peace Foundation with the working-level tasks on the ensuing investigation of Jeju 4·3.

In terms of organizing the Yeo-Sun 10·19 Committee, the legal expert also stressed that the positions need to be filled not only by government officials in general service but also those in special service. This is another difference from the Jeju 4·3 Committee, which consists of general-service officials dispatched from the government. The speaker concluded his speech by calling for the consideration of endowing the working-level subcommittees the authority to carry out the tasks of recording the victims’ Family Relations Registers, as well as the relevant applications and registrations under Article 12 of the Yeo-Sun 10·19 Special Act.

In the meeting with victims’ family members, Chairwoman Min of the municipal-level special committee stressed the importance of popularizing the Yeo-Sun 10·19 Special Act and arousing social interest in the issue. The municipal council member also urged the local government to take active, responsible measures for publicization of the case. “Time is running out,” she said, demanding the archiving of the testimonials of survivors as well as first and second-generation family members of deceased victims, as well as that of documents that provide proof.

Lee, head of the Seoul-based bereaved family members, mentioned the legitimacy and imperativeness of the resistance movement. Calling for ensuing measures of the special act legislation, he placed importance on a comprehensive national-level investigation into the progression of the resistance and identification of the perpetrators, as well as the revision of the school textbooks.

Kim from the National Institute of Korean History pointed out that the latest legislation failed to address the matters concerning the non-permanent positions of the subcommittee chairs. The history expert also mentioned the issue of organizing the investigation report planning committee, calling for the need to revise the special act.

The Yeo-Sun 10·19 Pan-National Committee and the YCRI plan to complement the content of the enforcement decree and propose the related bill immediately after the launch of the Yeo-Sun 10·19 Committee on Jan. 29, 2022. 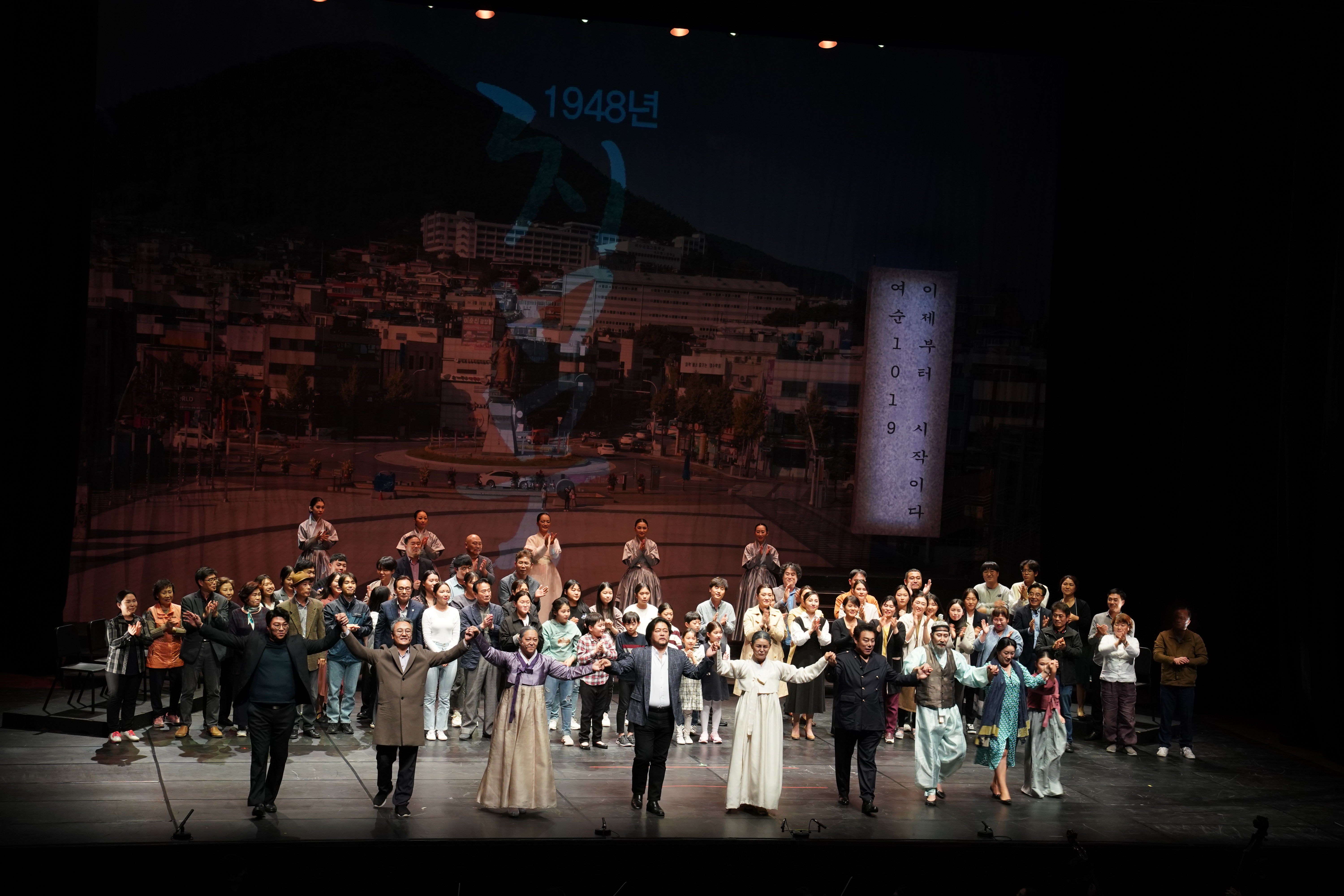 Soprano Kang Hye Myung and the Yeosu Symphony Orchestra takes a curtain call after staging the opera “Silence in 1948”.

Voices of those silenced now heard through opera

The Yeosu Symphony Orchestra (Representative: Moon Jeong-sook) staged “Silence in 1948” once again. The original opera shed new light on the Yeo-Sun ‘incident’, which has yet to be properly named, and the sufferings inflicted on the innocent citizens during the historical tragedy.

On Oct. 19, 2021, the Grand Theatre of the Yeulmaru Art Center in Yeosu City was crowded with the audience members of the opera. The event was organized three years after the first performance that was staged in commemoration of the 70th anniversary of Yeo-Sun 10·19.

The opera begins with a scene where Yeon-sook, a 77-year-old woman, accidently watches a documentary on TV titled “Yeo-Sun 10·19: Unforgettable Historical Event in Contemporary Korean History Caused Due to Ideological Confrontation in the Nation’s Turbulent Era”. The documentary arouses the lady’s memories of how she has lived for 70 years, especially with the post-traumatic stress disorder after witnessing all of her family members killed on Oct. 19, 1948, when she was only seven years old.

The voice of the little girl, now aged 77, was heard through Soprano Kang Hye Myung. The professional vocalist is well known for directing and starring “Sun-I Samch’on”, an original operatic work about Jeju 4·3 which was first staged in 2020.

Kang has expressed her consistent aim to contribute to the popularization of the painful memories of Jeju people. She is also determined in her efforts to encourage people to remember Jeju 4·3 and Yeo-Sun 10·19 together.

“I will keep in mind the pains that the victims’ families have suffered and the struggle for memories that has continued for a long period of time,” the soprano said, expressing her heartfelt gratitude to those who worked for the performance without giving up hope under difficult circumstances.

Revised Jeju 4·3 Special Act passed at the National Assembly plenary session, taking one step closer to the resolution of Jeju 4·3