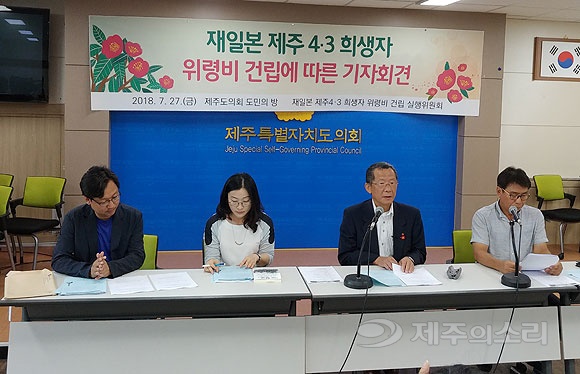 On the 70th anniversary of Jeju 4·3, a civic movement has begun work to erect a memorial monument dedicated to the victims of the massacre in Osaka, Japan.

At 11 a.m. on July 27, the Committee for Establishing the Memorial Monument in Osaka for Jeju 4·3 Victims held a press conference at Jeju provincial council. The committee spokesperson stated, “we decided to establish a memorial monument in Osaka for the victims of Jeju 4·3 for the Jeju Uprising and Massacre to be remembered for a long time in the region that has keen relations with Jeju.”

The committee revealed that Zainichi Koreans, Japanese citizens and the Jeju public will jointly raise funds totaling 3.5 million yen (35 million won) to establish the memorial monument in Tokokuji (Tongguksa in Korean), a temple for Zainichi Koreans in the Tennoji District, Osaka City.

The committee spokesperson also said: “Osaka, the Japanese city with the largest Jeju-born Korean population, has held memorial events for the victims of Jeju 4·3 over the past two decades. It is therefore a region that has kept the pent-up anger and sorrow of the Jeju locals. Our goal is to set up a memorial monument for the victims in this sense.”

He continued: “All of those who lost their lives due to Jeju 4·3 should be regarded as victims. The expatriates from both Koreas who settled in Japan needed to live together. Under the circumstances, it was desperately required to find a path from confrontations toward reconciliation and from hostility toward harmony.”

In conclusion, the committee statement stressed: “Establishing the memorial monument for the victims of Jeju 4·3 aims to soothe the souls of the deceased and their bereaved families. At the same time, it will raise public awareness of the value of peace and human rights by leaving unforgotten memories of Jeju 4·3 in Osaka, a city closely related to Jeju in history. Ultimately, we hope that the monument will help prevent such a tragedy as Jeju 4·3 from occurring in the world again.”